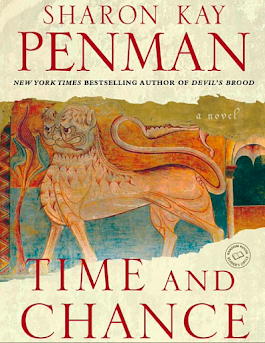 This is my fourth novel to read by Sharon Kay Penman. It is a sequel and begins after The Anarchy period in 1100's England. I admit going in I was already partial to anything about Eleanor of Aquitaine so this was going to have to be really awful for me not to enjoy it. I love Penman's style and her stellar research. She is known for being rock solid with historical facts and I am comforted by that when I read her books. It is not enjoyable for me to read a long epic historical fiction novel only to find out most of it was embellished or distorted for the purpose of the writer's narrative license.

The story begins with the newly married Eleanor and Henry and how they are navigating his reign as King of England. Penman does a good job of setting up the story through the eyes of several main characters, one of which is fictional. His name is Ranulf and my impression is that throughout the story and the previous book he is there to give us a glimpse into the lives of the Welsh people. He is descended from a Welsh mother and is a bastard of King Henry the first. He is also married to Rhiannon (also fictional) who is Welsh. I do confess that I wish she'd stuck to real characters as I think Ranulf and Rhiannon have way too much of a part in the two books I've read so far in this series. Eleanor and Henry have enough drama between the two of them that I think we'd have been better served by reading more of their lives than adding a character that doesn't even exist. But over time I grew to enjoy Ranulf more and even found myself wondering what will become of him in the next book, Devil's Brood.

Much of this book is centered on Henry's rift with his Archbishop of Canterbury, Thomas Becket. I found this to be the most compelling part of the book. I know some might find the material a bit confusing and dry but it is a complex subject and requires concentration. I felt well rewarded by the end of the book in that I finally understood what caused such a power struggle between the two former friends. Penman does a good job of setting it up in chunks interspersed with lighter moments between Eleanor and her ladies, Henry and his relatives, and Ranulf and Rhiannon's lives so that it isn't too much to process at once. I found myself really beginning to see both sides of the conflict and to know why there is no real hero in the end here.  Henry and Thomas both come across as incredibly stubborn and entitled and you just know it isn't going to end well.

Eleanor gives birth many times throughout the book and at the end we see the birth of her last son, John. Without giving too much away we also see the cracks beginning to form in her and Henry's romantic relationship as Eleanor ages and Henry grows restless with being her husband. Clearly, the time they spend apart is a huge factor as to why their marriage continues to flounder.

In addition to Henry, Thomas, and Eleanor's lives we get a glimpse of some of the Welsh leaders of the day which I found really interesting. I know next to nothing about this part of history so I was happy to learn something new.

I really enjoyed this book but feel it was sort of a bridge to the next one. The following book will delve more into the children of Eleanor and Henry and their final marital break. It is the middle book of what was originally a three part series so this makes sense and from what I've seen it is the shortest book in the series. I'm looking forward to continuing and will write a review of the next book when I complete that read.