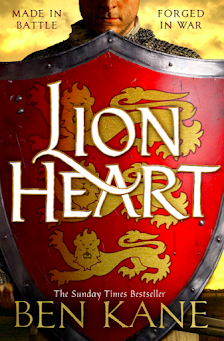 I have to admit that reading historical fiction written by men has always been hit or miss for me. No disrespect to men....I love men! But sometimes their writing can lack all romance or personal touches beyond dates and battles. So the cover for this book is what really hooked me into trying it, shallow I know but I'm a sucker for all things Crusades and Richard the First.

This was a well written piece of historical fiction. The author plans to make this a three part series and I will definitely be reading the next two books. We open Lionheart with a fictional character named Rufus. This is not his real name but one given to him by his captors. Right away I liked the style of the book, written in first person and giving us a running glimpse into the character's thoughts. Rufus is an Irish boy who has been given as a hostage to the English after his father and kin rebelled against them. He is lonely and depressed and treated horribly by one of the knights at the castle where he is being held. Gradually, through a wild turn of events, Rufus becomes a trusted squire, and then eventually, knight of Richard the Lionheart.

This book spends a lot of time setting up the relationship between Rufus and the common squires around him and focusing on the struggles between Henry Plantagenet and his sons. Our main character is always there in the middle of battles and action, often through coincidental twists of fate that stretch the imagination a bit. I know some of the reviews I read took issue with this but with fiction I always give a lot of wiggle room to authors trying to let their readers in on as much of the history of the day as possible. After all, it is called historical fiction for a reason.

After many years of service Rufus is eventually knighted and becomes a loyal follower of Richard. He is grateful and humbled to be given the opportunity to serve a man he greatly admires and respects. There is still a tension involving the original knight who beat him when he was newly arrived from Ireland (whom he calls Boots and Fists) and Rufus that has yet to be resolved. In the sequel I expect there to be more fireworks between these two.

Lionheart does not follow Richard and Rufus to Outremer and the Crusades as that is the basis of Book 2. Rather it sets up the characters, real and imagined, and their personalities and qualities that make them unique to their place in history and the story. Major battles and skirmishes are told with plenty of detail but not so much that you lose interest or find it hard to follow. I greatly enjoyed the way the author gave us an inside view into how Henry is betrayed by his sons and how Richard manages to gain the trust and loyalty of his men. Kane does a good job of showing how Richard defends his rightful territories while adding personal touches that make us want to know what happens to these characters later.

If I had one negative about this book it would be that it could get a bit simplistic in its dialogue. I have reviewed books by Sharon Penman about this same time period and she is superb at the vocabulary and dialect that would be realistic for the time and place. I think Kane does well but does not have as good a grasp on this area of his writing and so I occasionally found myself thinking the characters sounded a bit twenty-first century. But this is minor and not so glaring that it detracts from the overall feel of the story.

If I want to read Book 2 in a series then it is a good sign that the first book was a job well done. I have already ordered Crusader and am excited to begin it soon. I would recommend this book to anyone wanting to know more about how Richard the Lionheart went from a seemingly minor third son of Henry the Second to master of Aquitaine and eventually King of England and Crusader.