The Summer Country by Lauren Willig 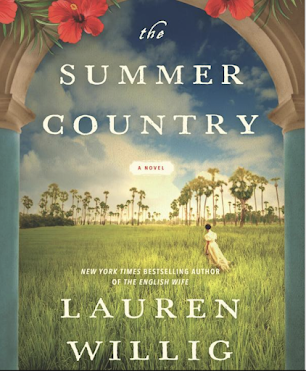 I had such high hopes for this book. And there are many positives about it. The lush descriptions of Barbados and its plantations, the people, and the bustling city of Bridgetown in the 1800's.  I was excited because I am always looking for books that accurately portray life in the West Indies long ago and that include depictions of slave owners and slaves without being politically correct. The first few chapters I felt I'd finally found what I was looking for but as I continued it just seemed that many of the situations between the characters were a bit fantastical for the time and place.

It is entirely understandable. After all, it is a balancing act to write about plantation life in our modern times. People often don't want realism here but rather, rewritten history. I prefer truth. And this book just felt historical fiction that was way too heavy on the fiction.

The style of the book was unique and different. Willig skips back and forth between two time periods, allowing short glimpses to unfold with a dash of mystery. Just about the time you think you are immersed in a character's life she switches back to the past or present. Some might be bothered by this but I found it kept suspense high and made me want to keep reading.

The story revolves around Emily Dawson and her relationship to the Davenants who are owners of a neighboring plantation. Emily has inherited Peverills upon the death of her uncle and to the shock and surprise of her brother and family she has decided to try to stay and make something of it. Her life takes place during the mid-1800's and as the story switches back and forth in time we are privy to the life of Charles Davenant, living in the early part of the century and his struggle to run Peverills. There is a family mystery brewing throughout that involves deception, romance, and racial strife and Willig does a superb job of giving the reader just enough information to stay curious without giving away too much too quickly. She is a good writer and the dialogue and interactions between the characters is authentic.

Where it went off the rails for me was toward the middle to end of the book. It wasn't so much the mystery (that was quite interesting) but rather that if felt like she was trying too hard to make it a political commentary. While I understand that interracial relationships may have been different in the West Indies than say the Deep South in the United States it still felt like the characters were deliberately put into situations where they were either atoning for their sins or unrealistically modern in their reactions. It just felt a bit forced and took away from the excellent story and atmosphere she'd created at the beginning.

I am always open to trying other books by an author to see if I feel differently with a different storyline. I have seen some solid reviews for her earlier work and plan to read one to see if I enjoy it.