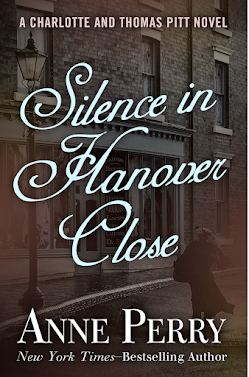 Publication Date: October 4, 2011
Length: 368 pages
Reading an Anne Perry mystery is like visiting an old friend. I have read many of her Pitt, Monk, and Christmas novels and one from the WW1 series. The comforting thing is that there are so many left to read and she is still writing new books yearly. When I need a break from epic super long books I like to grab one of hers and read it in a few days. She never fails to follow a tried and true formula and that is what appeals to her readers.
In this story we find Victorian Era couple Thomas and Charlotte Pitt hot on the trail of a murderer and mysterious woman. Of course Thomas is the policeman and his wife Charlotte is never supposed to be involved in the case but she somehow manages to insert herself every time, much to his dismay. Three years ago Robert York, a British Foreign Officer, was murdered in his home in Hanover Close. The killer has never been caught but the suspicion is that he was killed for secrets he possessed about overseas dealings. Inspector Pitt is asked to reopen the case by his superiors because his widow is remarrying a high level diplomat and the government does not want any surprises or embarrassment resulting from an unfinished investigation.
As Pitt questions suspects and members of the family's household he becomes involved personally when he is accused of murder. His superiors seem unwilling to come to his defense and this seems incredibly suspicious to both Charlotte and her sister Emily. In order to find out more about what happened, Emily decides to apply as a lady's maid in the York household. Through various twists and turns she convinces the staff she is just a simple servant while listening to private conversations and intense family drama. Charlotte poses as a visiting society girl and along with a friend, Jack Radley, worms her way in to the drawing rooms of the York house to listen to gossip as well.
The drama slowly unfolds to its climactic ending with the Pitts, Emily, Jack, and the spirited Great Aunt Vespasia hot on the trail of the real murderer. As usual, I was unable to figure out whoodunit until the very end. One of the most satisfying things about reading Anne Perry is that she definitely anticipates one being able to pick the most likely scenarios and then she shakes them up to the point that you just don't see the real truth coming. Out of all her books that I've read only one time did I know for sure how it was going to end. This is a real testament to her creativity.
I am not pretending to equate her writing with Jane Austen but I find her books remind me of the feel of an Austen novel in mystery form. I have often found myself forgetting that her characters were written by a woman living in current times. This is rare in novelists today. There is often a give away in the way characters talk and behave. Try as they might most modern writers always have a bit of a "tell" that they are trying to replicate dialogue and customs from long ago. Not so with Perry. She is superb. I even notice she does not hesitate to include authenticity in the interactions between Thomas and Charlotte. There were ways men and women behaved in the nineteenth century that were just a fact of life. Charlotte is strong willed and independent but she is no modern feminist. Perry sticks to the mores of the day which makes reading her books more pleasurable. I do not like to feel the author is trying to change the era in which they are writing into a politically correct view of how they think things should have been.
If you are looking for a solid historical mystery pick up one of her Pitt or Monk novels. You will not be disappointed.
19th Century Mysteries Victorian Era