Queens of Jerusalem by Katherine Pangonis 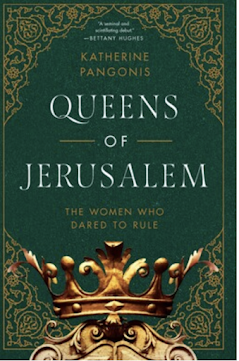 Queens of Jerusalem is the first non fiction book I have read concerning the Crusader period. I have read many historical fiction books and have been following an excellent podcast (History of the Crusades) for quite awhile now. Thanks to the background knowledge I've amassed lately in fiction and audio shows I really found this book fascinating. This is Pangonis's first book and I think she did a great job!

The following ladies are highlighted in this book: Morphia of Melitene, Alice of Antioch, Melisende of Jerusalem, Eleanor of Aquitaine, Constance of Antioch, Agnes de Courtenay, and her daughter Sybilla of Jerusalem. I was a little surprised that Sybilla's half sister, Isabella didn't get her own chapter but I suspect that had to do with the fact that she wasn't seen to be a strong ruler with great influence in her own right. I also thought including Eleanor of Aquitaine to be a little odd in that she wasn't Queen of Jerusalem. However, I see her significance in this period and understand why she would appear in the book.

Each chapter delves into the background and marriages of the ladies and she stresses the fact that much of their influence came from the ability to command the respect of the men around them. The research was often slanted in the direction of sinner or saint. William of Tyre's "History of Deeds Beyond the Sea" is used for much of the book but Pangonis reminds us frequently that he was a man of his time. And that as an Archbishop his standards for the women of his day were high. Let's just say he gives Queen Melisende a gold star for proper behavior and is not impressed with Eleanor.

I felt like the overall feel of this book was one of modern day feminism. The author is realistic in portraying the struggles of medieval women trying to assert themselves but she often devolves into a discussion about how the men didn't give them a chance to show what they were "really made of." While I agree this is likely the case I also think that it is a stretch to expect women would be considered likely rulers in such a brutal time period. She does acknowledge, as in the case of Queen Melisende, that some were given more respect if they were original inhabitants of the Crusader states as opposed to Europeans, ie, Eleanor of Aquitaine who were seen as outsiders from Europe.

The matter of succession is touched upon time and again and even though some of the women were allowed to rule if no males were sired in the line, they often gave up any semblance of influence as soon as they were married. Their husbands assumed the role of King. Queen Melisende is the exception to this rule as she ruled alongside her husband, Fulk of Anjou.

I also enjoyed how she included some of the Muslim women who made an impact on the region and while they didn't get their own chapter in the book their stories are worthwhile and won't be found to appear much in literature or history books.

The personal touches she included are very interesting. There were a fair amount of stories highlighting the plight and personality of each woman. It made me sympathetic to them and see them as people instead of distant historical figures. I came away wanting to know more about each one. Their clothes, homes, and daily lives are beautifully described along with the landscape and harsh climate which really makes one feel like they are there. It was fascinating to read about all they endured and I found myself feeling sad for the ones who were treated badly and put aside when they could not produce an heir or their husbands tired of them.

I thought this book was well researched and included information I'd not heard elsewhere. She stresses the importance of remembering that the ability to see the women is always filtered through the lens of the men writing about them and therefore some of the time we have to draw conclusions based on what we know of the period and realizing not everything is an honest, unbiased account. She did a great job of sifting fact from fiction and I came away with a better understanding and respect for these ladies who were often put into dangerous and impossible situations. One can only imagine the courage and strength it took to be a female ruler of any kind in the middle ages much less in places like the Crusader states.