Uneasy Lies the Crown: A Novel of Owain Glyndwr by N. Gemini Sasson 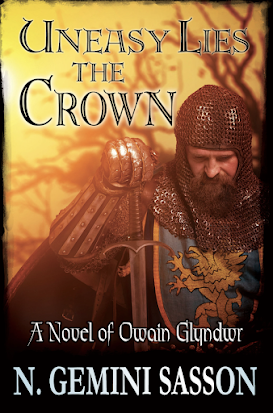 Publication Date: November 1, 2012
Length: 434 pages
This book appealed to me because it concerns an area I know almost nothing about: Wales. And I certainly had no working knowledge of Medieval Wales. Studying Owain Glyndwr is probably standard history coursework if you are an English or Welsh child but I doubt here in America the average person could even find Wales on a map. So this book really intrigued me. Sasson has written several books on more obscure figures (Robert the Bruce, Queen Isabella) and I admire that willingness to take on lesser known subjects. This story also coincides with a time period in England that I find intriguing....the rise of Henry Bolingbroke and the involvement of the Percy family, specifically Henry Hotspur, the English knight.
The story begins in the late 1300's with the birth and childhood of Owain Glyndwr, a Welsh son of a nobleman who traces his lineage to the great princes of Wales. Owain is happy and thriving with his family and expects to live out his days inheriting the land he lives on from his father although he realizes his father is beholden to the English King Edward III and wishes he did not have to leave them so often to fight in English wars. When his father dies of the flux while away fighting with the king's son, Edward the Black Prince, Owain is sent to live as a ward of the Earl of Arundel.  He eventually ends up in London where he studies law and becomes an apprentice of one of the justices there. He marries and has a family and is content to live out his days happily with them on his own land back in Wales. A dispute with a neighboring English marcher Lord sets off a chain of events that thrusts Owain into a leadership role he never intended on.
When Henry of Bolingbroke usurps the throne of his cousin Richard II, Owain is determined to fight for Wales and its independence. He is successful in battle enough that he eventually enters into an agreement with Henry Percy (Henry Hotspur) which comes with a heavy price. He finds himself unable to retreat from his warrior status and is drawn deeper and deeper into his role as an almost mythical savior of the Welsh people. We see his subsequent stubbornness and bravery as he tries to hang onto any small shred of land and castles against enormous odds.
A unique aspect to this book is how Sasson weaves back and forth from her story of Owain to the writings of the Welsh poet Iola Goch. After certain chapters she gives primary source excerpts from the poet's book in which he writes of the exploits of Glyndwr. It is always an added bonus for me to have the thoughts of actual living people from the day in an historical fiction novel. Goch clearly presents Glyndwr as a mythical King Arthur of sorts and so it isn’t exactly an unbiased account. Still, it is a nice touch to the story.
I enjoyed this book simply because it was new material for me. I hadn't ever found another book on the subject in historical fiction and so I knew I was bound to learn a lot. Sasson is a good writer and has done remarkable research. I appreciated the way she consistently gave the year at the beginning of each chapter as it kept me focused and able to more easily follow the timeline of events. Her willingness to show the human side of her main character was nice as he is not presented as all saint or sinner. He has affairs and fathers children out of wedlock and is torn between his wife and lover. He is shown as loyal to friends and fellow countrymen while also being willing to come to terms with the English if necessary. In the end, she conveys the frustrations and conflict within him as he tries to decide what to do when surrender seems to be the only way out. She also does a good job of immersing one in the harsh weather and terrain of Wales. Fighting through a Welsh winter was not for the faint of heart. I was chilled to the bone just reading certain parts!
I think there could have been a bit more in depth description of some of the battles. The story often got confusing for me since I do not have a working background knowledge of Welsh history. I found myself having to look up certain parts of the story to better understand what was going on. Sometimes I felt the author took for granted that readers would know more than is realistic given that this subject, time, and place are pretty obscure for the average person. Overall though I thought she did a nice job of telling the main story of his life and evoking a sense of atmosphere and history. There were parts of the book that had me sad and depressed for Owain and his men. When things become dire for them and they still soldier on it is hard not to be awed by their courage and conviction.
I look forward to reading her books about Robert the Bruce and Isabella. Having researched much of the material from the Glyndwr novel she has earned my trust that her historical research is solid and accurate. You will learn so much from this book about a forgotten warrior and his cause. I find myself much more sympathetic to the Welsh and want to read more about their long struggles for independence.
Medieval Period Wales