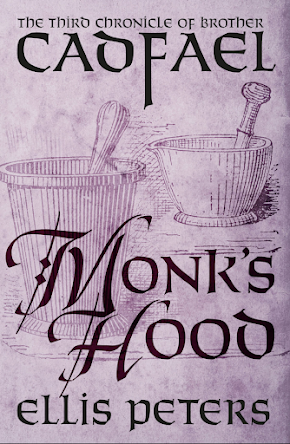 Publication Date:  January 1, 1996
Length: 287 pages
This is my third book to read in the Cadfael Chronicles. I remember coming across these books many times and not being very interested in trying them. I'm not sure exactly why except that I thought the time period was too unfamiliar to me then. After getting to know the 1100's a little better through other sources I am now hooked on her series! It's a little like reading Victorian Anne Perry novels but set in the middle ages: a great mystery, with a compelling main character, history, and wonderfully clever dialogue. What's not to love about that? Also, the font on the cover of the books is so beautiful. That is a really lame reason but if I'm being honest, it's a great visual draw to her books.
The story begins in 1138 during the period in England known as The Anarchy. King Stephen and Empress Matilda are at war with each other although at this time Shrewsbury is fairly quiet. Cadfael is a middle aged monk who lives out his days in Shrewsbury Abbey. He is the herbalist and loves being in his greenhouse tending to his plants and helping the members of the Abbey when they are unwell and needing his medicinal help. In his former days he was a sailor, soldier, and Crusader who has seen much of the world, but has settled down to a quieter religious life.
When the Bonel family moves into a house owned by the Abbey, Brother Cadfael is called to tend to Gervase Bonel who has taken ill. He tries to no avail to relieve his symptoms with a mixture containing the plant Monk's Hood, a deadly combination if not treated with proper care. While there, Cadfael recognizes his long ago love, Richildis, Bonel's wife. She has a son, Edwin, who hates his stepfather. When Bonel mysteriously dies, Edwin is accused and becomes a fugitive. Cadfael is determined to find out the truth owing to his unwavering pursuit of justice and his remembered love for Richildis. His quest takes him through many twists and turns including a trip into Wales, his homeland. With his usual wit and insight into human nature, Cadfael unravels the truth and is able to find justice.
I've read some reviews of these books previously that say you don't have to read them in order. And while technically that is true I would consider doing so. There are recurring characters with distinct personalities that I would not appreciate as much if I just picked up a random volume. I think I'd still be very confused. There is a subtle humor in the way Peters writes and you see previous events build on one another in the way the characters interact. Brother Jerome, Prior Robert and Brother Mark are frequently included throughout the stories and serve to add humor and levity. Cadfael easily sees through the pious Jerome and has affection for his apprentice Mark. Without their original backstories from the first books I wouldn't really pay much attention to them.
These books are pretty short and can be read quickly. However, I have found you really have to pay attention. There is a lot going on behind the words, meaning if my mind wanders I get lost quickly. The mystery part is not usually super involved but her style of writing is a bit like an old fashioned classic book I think. It is not as straightforward as more modern books and I like that because I find it expands my vocabulary and thinking skills. It is fun to try to unravel some of the sarcasm and deeper meanings as we are taken inside Cadfael's thoughts. And she is great at weaving history throughout the story.
I'd like to finish them all eventually and will review more as I work my way through them.
Medieval Period Mysteries Wales