A Fugitive Green by Diana Gabaldon 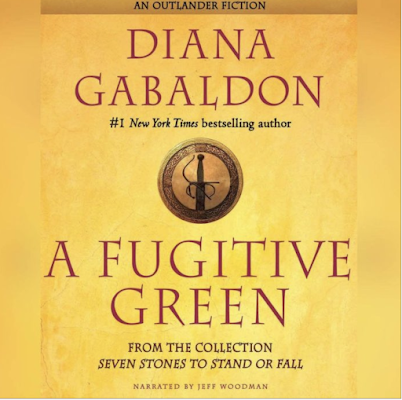 This story is a novella first published in Gabaldon's collection Seven Stones to Stand or Fall. It has never been published in book form on its own that I can find other than for audible. I highly recommend buying Seven Stones if you are an Outlander fan as it has several of these novellas in one book and it is worth every penny! This story gives us background on some of the more minor Outlander characters that are linked to some of the major ones.

It is 1744 when the story opens. Minnie Rennie (aka: Minerva Wattiswade) lives in Paris with her father Andrew Rennie (aka: Raphael Wattiswade). On the surface Raphael is just a dealer of rare books but really he is a collector of letters and information which he uses to his advantage and financial gain. Minnie is well aware of her father's undercover associations and helps him when necessary. She is smart and capable and has a fierce independent streak which serves her well in this shady world. At the opening of the story we find her in the bookstore where a note is delivered concerning a mysterious Mrs. Simpson. Minnie has been expecting this letter for some time as it contains clues as to the identity and, she hopes, the whereabouts of her mother. She is elated to receive it and hopes to travel to meet this Mrs. Simpson.

Raphael wants Minnie married off well. When he sees an opportunity to obtain both a prospective husband for her and further his quest for information to suit his financial ambitions, he sends her to London to work on both missions. She is to be chaperoned, much to her chagrin, by one Lady Buford and two Irish bodyguards. Minnie is determined to obtain the information her father wishes while not being coerced into a loveless, boring marriage.

Meanwhile, Hal Grey (brother of John Grey from the Outlander novels) is having troubles of his own. Living in London, he is distraught after the death of his wife, Esme and the unborn child she was carrying. His guilt is further exacerbated by the knowledge that she had been carrying on an affair with a man whom he subsequently shot and killed in a duel. He also has family baggage relating to his now deceased father who committed suicide a few years before when he was suspected of being a secret Jacobite.

When Minnie is asked to meet with one of her father's contacts she ends up meeting Hal and the two share an intense personal moment. She will end up meeting him again as her tasks cause her to further delve into his personal problems in order to obtain information requested by a secret contact. Minnie also is determined to meet with Mrs. Simpson and find her long lost mother.

I have read A Fugitive Green twice now. Once when I was an Outlander newbie and then again this month as a long time Outlander fan. It is interesting the things I picked up on the second time around. Little details that mean a lot more now that I'm super familiar with the characters and their future selves in the big books and Lord John Grey spinoffs. It is a great addition to the stories and character personalities you won't find in the main novels.

Having said that, I think that as a stand alone story it would probably not be my cup of tea. I was already invested in Minnie and Hal because I knew about John Grey and also a bit about them as related to the Outlander saga. I admit I'm not a fan of novellas in general because I like to really sink my teeth into a story and they always leave me feeling cheated out of that experience. But in order to really care about these characters you would need to have more of a reason than the one outlined in the plot of A Fugitive Green. It is not terribly detailed or compelling on its own. Seven Stones is itself a collection that I wouldn't care much about had I not already been so invested in the characters.

As always, Gabaldon is original and interesting with the witty dialogue and vocabulary. This is an area she excels in. The time and place are always authentic and well researched and I am always pleased at how she ends her stories with a clever line each time. One of the best things about her books is the way in which she does not constantly explain things to the reader. She is great at just telling the story and assuming we will eventually pick up on what is happening. It's always a great brain challenge! A Fugitive Green is a good read if you want more insight into the Greys of Outlander.