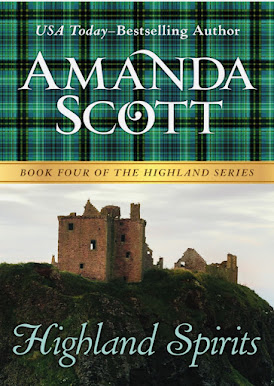 Publication Date: October 1, 1999
Length: 397 pages
Amanda Scott is an interesting author for me in that I can't seem to decide how to classify her books. Are they romance? Historical fiction? Mysteries? Compared to classics or epic sagas they can come across as simplistic, contrived, and predictable. I have read five of her books now and every time I start one I think to myself, "this is a romance book Shellie, you don't read romances!" Then before I know it I'm sucked in and enjoying myself immensely! I definitely do not like the romance genre if that's all the book is about. And some of Scott's covers do her a disservice as they suggest that this is the entirety of the book. You know, the covers with steamy Highlanders gazing out at you with smoldering eyes. But they are so much more. I feel a need to review some of her books in order to appeal to readers like myself who do not care much for typical romances but love historical fiction. It would be a mistake to skip these books as they are great for a light read while learning some history.
This is Book 4 of a four part set called the Highland Series. They build upon one another with the characters' lives intertwining but you can read them on their own as well. I personally think reading them in order is more enjoyable as I wasn't at all confused about how each person related to the other. In this story we revisit Penelope (or Pinkie as she is called) and her brother Chuff. They were orphans who previously were rescued by Black Duncan Campbell, a prosperous Highlander. The year is 1765 and Jacobite sentiment still runs deep in the area. The Campbells are mistrusted due to past grievances but Pinkie and Chuff are just happy to have a family nearby. As the story begins we witness Pinkie watching her "ghost" or, what she thinks is a ghost, in the woods of a Highlander and his dog. They vanish before she is sure but this isn't the first time she has seen them. Of course this is the "mystery" of the story that will be resolved later.
Meanwhile, Michael Kintyre, the Earl of Mingary is having ideas of his own about Chuff and the Campbells.  He'd like his sister Bridget to marry Chuff in order to offset a debt he owes. When all parties decide to travel to London for various personal reasons, we see an attraction grow between Michael and Pinkie. Michael is not keen on marrying her however due to his own aversion to her bloodline and lack of status. We are treated to London life: parties, balls, and the opera and the machinations of everyone as they try to impress high society.
Over all this gaiety and socializing lies the cloud of Sir Renfrew Campbell, a Scottish nobleman who would like to marry Michael's sister, Bridget in order to gain a foothold on the Mingary lands which he intends to use for his various businesses needing excess sources of timber. In his desire to possess her for himself he kidnaps her and the chase is on to find her and bring Sir Renfrew to justice. We meet several characters from the previous highland novels, Maggie and her husband the Earl of Rothwell and Mary, Black Duncan's wife. It is fun to revisit them and have them weaved into the story.
I enjoyed Highland Spirits and all the Highland Series books. With each one I learned new, interesting tidbits about Scottish life after the Rising and the description of the countryside and manor houses were vivid. Scott does a great job of using authentic dialogue without overdoing it to the point of being unreadable. I appreciate the way the romance is subtle and not the main focus of the book but rather it complements a solid storyline.
Are these books Jane Austen or Charles Dickens? No and that's okay. I can sometimes be a bit of a snob about reading "literature" and then I have to remember that it's okay to just chill out with a glass of wine and a book that doesn't require a dictionary and weeks of my time. I think Scott works hard on her research and even though I can usually predict the ending well before it comes she has a unique way of keeping you reading because it's just a lot of fun. I am glad I discovered her books and when I need to just escape after an especially trying week they are the perfect romp!
18th Century Romance Scotland