A Christmas Odyssey by Anne Perry 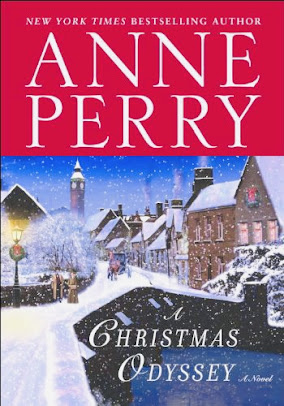 Publication Date: October 26, 2010
Length: 208 pages
I have almost finished reading all of Anne Perry's Christmas books. They are short and easy to read in one sitting, especially on a cold winter day by the fire, or in this case, a hot summer day in June.  Each book is its own separate story so you do not need to read them in any particular order. It is helpful to have read some of her Monk or Pitt books though because some of the minor characters in those books take center stage in the Christmas ones.
A Christmas Odyssey concerns the character of Henry Rathbone. He is the father of Oliver Rathbone, a prominent lawyer who features often in her other books. Henry has been asked to look into the disappearance of his friend's son, Lucien. It seems Lucien has rejected a life of wealth and privilege for the dark underworld of drugs and sexual deviance. This being the Victorian era it is impressed upon the reader just how private the search for Lucien must be kept since no self respecting member of society would even acknowledge the "underworld" much less know anything about where to look for a fallen relative. Henry enlists the help of his friend Hester Monk who is a major character from Perry's Monk novels and is quite familiar with shady and marginalized people she comes into contact with as a nurse and owner of a clinic operating to serve the downtrodden, forgotten citizens of the poorer part of town.
Through Hester, Henry is able to gain the trust and assistance of former brothel owner Squeaky Robinson and they set out to retrace Lucien's steps and see if they can gain any insight into where he may have gone. Their search takes them to the darkest places imaginable. They are accompanied by a doctor, Crow, who is not a credentialed doctor per se due to his own personal struggles, but nonetheless is a compassionate man who wants to help those in need who cannot afford medical services or, due to the nature of their occupations, would rather not be helped by a licensed professional. Henry, Squeaky, and Crow together meet up with Bessie, a young girl who has maintained some semblance of innocence despite being forced to live underground to survive with nefarious people in appalling conditions. She leads them through a maze of contacts as well as a literal maze of tunnels and rooms, helping them to untangle the trail of events that led Lucien to cease contact with his family. During the search it is discovered that a mysterious figure aptly named "Shadwell" is pulling the strings behind the lives and fates of those underground.
When evidence of two murders is discovered, everyone is frightened for Lucien as well as their own survival. It is obvious that Shadwell is watching their every move and if they are to make it out alive with Lucien intact it will take all of them working together to move quickly and cleverly to outwit the evil that poisons the lives of the inhabitants of this very sad, forgotten part of their city.
I will admit this is probably the darkest Anne Perry novel I've read thus far. She always tends to weave that element throughout her stories which adds suspense and excitement because you realize quickly her books are not meant to be what one would call "cozy" mysteries. This one seemed to be even more shocking than usual in that the vivid descriptions of drugs, sexual deviance, and intimidation were especially pronounced. She never writes graphically enough to be called sensational but it was just a tad more realistic and frightening than her usual work. Perhaps this is why she is so good at what she does. I wanted to look away, but I had to know how it ended!
The best part of Perry's books is that in the end evil is punished and good rewarded. In the Christmas books she develops the plot to a point where you think you'll never be able to see the holiday spirit in it but by the last page you are feeling happy, contented, and festive. Because this book was so much of a downer throughout it was remarkable that by the last page I had happy tears in my eyes at the resolution, making me glad I'd stuck with it to the end. I have never been sorry for picking up an Anne Perry book and this one is no exception, just be aware it can be a depressing slog at times. She definitely has written more uplifting Christmas books but they are always a fun read and the clues and mystery are revealed in a way that keeps your mind guessing.
19th Century Holiday Mysteries Victorian Era