Crocodile On the Sandbank by Elizabeth Peters (Amelia Peabody Book One) 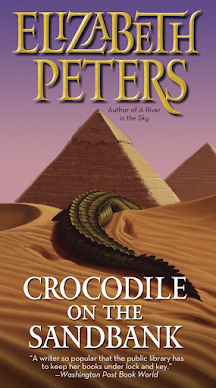 Publication Date: 1975
Pages: 352
I've been on a huge mystery kick lately. Especially cozy, historical mysteries. This book is number one on my list for summer mystery reading fun! It is strange that it sat in my Kindle to read list forever. I don't know why but I'd look at the cover and just think "yawn, not yet". Now that I finally gave in and read it I am kicking myself for wasting time. This is going to be an entertaining series. The sad part is that Elizabeth Peters (real name Barbara Mertz) passed away in 2013 and will not be writing more books. When I read up on her life after finishing the book I was absolutely fascinated. She earned a Ph.D. in Egyptology (didn't even realize that was a thing) in 1952 when most women normally wouldn't even dream of going to college for four years let alone the time it would take to earn a doctorate. She said later that writing gave her a way to earn money and be a stay at home mother. I could go on but this is a book review so I will get to it!
The story begins with our heroine, Amelia Peabody explaining how she came to know her friend, Evelyn Barton-Forbes and rescued her from the streets of Rome, Italy. Amelia is independent and wealthy, thanks to her inheritance, and Evelyn quickly is enlisted as her lady's companion to accompany her on a trip down the Nile, courtesy of Amelia, all expenses paid. I want a friend like that! Before they leave, Evelyn reveals that she has been disgraced by a scoundrel of a man and this being 1884 she is in despair that she will ever marry again or be fit for anyone else. Amelia, who is too independent minded to care about a husband, reassures her that she does not think less of her and encourages her to forget her troubles and enjoy life. Before the women can depart on their journey they meet the Emerson brothers, Walter and Radcliffe, who are embarking on an archaeological dig down the Nile. The encounter is an indication of the relationships to come between the four with Walter and Evelyn infatuated with one another and Emerson and Amelia completely exasperated with each other.
As the ladies make their way through Egypt and down the Nile they begin to encounter strange happenings. They seem to be the victims of bad luck and eventually downright frightening events when a mummy appears to be stalking the Emerson brothers dig and Evelyn is almost kidnapped. Due to a turn of  events, the ladies stay with the Emersons on their excavation site and continue to try to solve the mystery of why it is being haunted by the mummy. If you are already rolling your eyes and asking "why would anyone think this is plausible or readable" you have to trust me when I say I understand and I thought the same thing at first. I mean, mummies?? But stick with me.
For one thing, Amelia's character and inner dialogue are both witty and hilarious. Her banter with Emerson is like watching an old movie from the 40's with Hepburn and Tracy. Some of the quips between the two are very subtle. Peters really leaves it to the reader to catch. This makes the humor authentic and enjoyable. So many authors today add way too much explanation which leaves me feeling like I am being lectured instead of entertained.
I've seen other reviews of these books that compare Peabody's character to a female Indiana Jones. I disagree. One of the things that is so great about the book is that it feels like 1884. Amelia understands her place in society. She is brave and educated and independent, yes, but she also occasionally admits to being vulnerable and needing help. I didn't feel like I was reading about a modern, female version of a male character but rather a female version of a 19th Century single woman with the desire to explore and investigate.
Another bonus in this book are the descriptions of the Nile, the Pyramids, and the history of the area. Peters does a superb job of transporting the reader to the time and place and her knowledge of the period and its people really shines. Several reviews have said the book comes across as racist and paints the indigenous Egyptians in a bad light. I think if you are looking at it through a modern lens you will see it this way. But I see a story that is realistic for the time and place and also I remember that it was written in 1975 by a woman born in the 1920's. You just have to get past the urge to judge every book by present day standards or you will miss out on a lot of great literature. Most of Amelia's thoughts are likely how someone of her time would have believed. It doesn't take away from the clever writing and engaging story. She accepts and gives credit to the locals who are loyal and hard working and reserves scorn for the ones who deserve it.
The ending is honestly not a huge surprise and I didn't think the mystery part of the story was even the most important. She adds enough twists to make it worth your while and keep you guessing but the real meat of the book is in the setting and character development. The deranged mummy is just an extra bonus.
I am going to read a few other books before I read book two in the series. I want to always try new stories before I go and devote all my time to an entire series. But it is difficult to write this review and not want to start the next story. I am anxious to pick up where I left off and see what Amelia is up to.
19th Century Cozy Mystery Mysteries Victorian Era