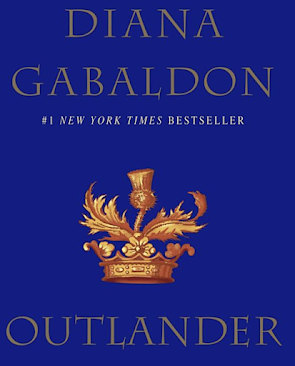 Publication Date:  June 1, 1991
Length: 640 pages
I started this book in 2003. I probably picked it up, started reading, and put it down a half dozen times. At one point I said I'd never finish it, that I wasn't interested. Then one day, inexplicably, I plowed through it and that was it. I.was.hooked. I read the whole series (Book 5 was the latest out at that time) and continued to collect and read them all as they were published. Then I moved on to the spinoffs with Lord John Grey and the novellas in Seven Stones. I cannot wait for Book 10 to be released in the future. It is safe to say I'm a die hard Outlander fan.
This is the original...the one where it all started. Claire Randall is on her second honeymoon in Scotland in 1945. She is fresh from the war as a combat nurse and is trying to get reacquainted with her husband, Frank, who has also been away in the war working in intelligence. The two attempt to forget that they've been apart for most of their short married life and barely know each other now.  During a solo visit to a set of standing stones they visited the day before, Claire touches one of the stones and disappears into 1743. When she awakens and attempts to find her way back to Inverness she is accosted by Captain Jonathan Randall of His Majesty's Eighth Dragoons and then rescued by a Scottish Highlander who takes her to a hideout where she is forced to accept she is not in Kansas anymore.
After a long night of disbelief, riding with the group of Highlanders, Claire is taken to Castle Leoch, seat of the Mackenzie lands and is interrogated by the clan chief, Column MacKenzie. The fictional story she relates is not believable to him and Claire suspects he plans to keep her there until he can find out who she really is. Claire despairs if she will ever find her way out of the castle, back to the stones, and home to Frank.
As she continues to devise a way out, Claire is forced to make the best of things in order to survive. She comes to rely on and trust one of her original rescuers, Jamie Fraser, an outlaw and nephew of Column and his brother Dougal, who is hiding out at Castle Leoch. Because she is English, she is distrusted by many of the inhabitants there and Jamie's kindness is a welcome change. Through a series of events Claire and Jamie are forced to marry in order to protect Claire from her original attacker, Captain Randall, who also does not believe her story of how she came to be in the woods near Inverness. He is highly suspicious of Claire's presence with the Highlanders and suspects her of being a spy. By marrying Jamie, Claire is protected by the Clan, although because of Jamie's status as an outlaw wanted for the murder of an English soldier, their safety is precarious.
During their time together Claire becomes conflicted about her feelings for Jamie and as she witnesses his loyalty and devotion time and again it is hard for her to ignore the love and attraction she has for him. Through a series of events and near death experiences, Claire and Jamie find themselves working together to find a way to reconcile their relationship with the obstacles fate has put in their way.
I knew trying to write a review of this book I wouldn't do it justice. Every review or summary makes it sound like a romance novel. And there is definitely romance. But there is so much more. Adventure, suspense, rich characters who are nuanced and have fleshed out, detailed background stories. There are twists and turns and premonitions and you never know what new circumstance Jamie and Claire are going to find themselves in. Rumors of witchcraft, murder, Jacobite plots, and hints of the coming rebellion provide readers with a mini history lesson along with the romance and drama. There are also the descriptions of the Scottish countryside and a real sense of what it would have been like to have lived and survived during the 18th Century.
Gabaldon is a superb writer and I actually think her writing gets even better in the subsequent books. I remember thinking Outlander was amazing and also long...clocking in at 650 pages. After reading them all I realize it is actually a short story compared to the others. There is so much detail, so many subplots, and so much foreshadowing of coming storylines that no matter how many times you read the book you forget things. That is the mark of a true epic novel. You just can't remember it all.
If you begin this story thinking it is too fantastical and unreal and want to put it down, I urge you to give it a chance. Also, disclaimer....there is violence and sadism in the story which was off putting to me. I still wish the author hadn't gone as far as she did with it and I've had to get past it in order to enjoy the rest of the series. I know some people I've discussed the book with think it was necessary to explain some of the deeply held feelings of the main characters but it was disturbing enough to me that I don't care to re-read those parts again. Obviously it isn't the main focus of the book though or I'd not have become such an enthusiastic fan.  The amazing story outweighs the occasional ugliness and I wouldn't recommend the book if that weren't the case.
If you finish Outlander and enjoy it you had better clear your calendar though. There are nine books now, all of which are anywhere from 700-1,000 pages long. And trust me when I tell you that when you reach the last page of each one you will immediately be opening the next!
18th Century Outlander Scotland