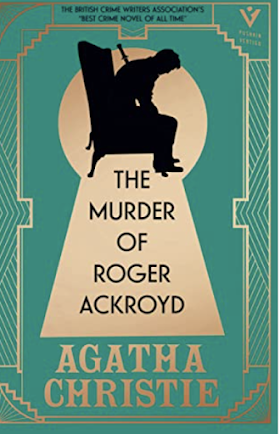 Publication Date:   June 1926
Length: 312 pages
I finished this book last week but it's taken me several days to get up the courage to write this review. I'm afraid I'm going to stir up a hornet's nest with the Agatha Christie lovers but I'm going to be honest.....I keep trying and I don't know if she's my cup of tea. I read somewhere recently that if you don't like this book, you won't like anything by her. That is discouraging because I really, really want to like Christie's books. I mean, c'mon...her books are only outsold by the Bible and Shakespeare according to the stats. Maybe what made it worse with this book was that I'd read other reviews about the ending and while they didn't give it away, it was too much hinting so that I figured it out way before I'd finished reading. That's a bummer with a murder mystery!
Our story begins with our first person narrator, Dr. James Sheppard. He discusses the sudden suicide of Mrs. Ferrars, a local widow in his hometown, Kings Abbot. She was recently engaged to widower Roger Ackroyd, who is of course, very upset by this recent turn of events. That evening, Sheppard is invited to dinner at Fenley Park, Ackroyd's home, along with Ackroyd's sister in law, her daughter, and other friends and business acquaintances.  Ackroyd confides in Dr. Sheppard that Mrs. Ferrars was being blackmailed and that is the reason he believes she took her life. Later, when Sheppard returns home, he receives a call from Ackroyd's butler who tells him that his employer has been murdered. Sheppard goes to Fenley Park and indeed finds Ackroyd has been stabbed to death. Sheppard, along with his very inquisitive sister, Caroline, becomes entangled in a search for his killer.
When retired detective Hercule Poirot moves in next door to the Sheppards, he is recruited to assist in the hunt. Poirot is witty and stubborn as well as self assured and immediately tackles the list of viable suspects, including Ackroyd's niece Flora, her fiance Ralph Paton and game hunter and friend Major Blunt. He sifts through each new clue patiently, weaving a tale of his thought process to Dr. Sheppard. The two work to puzzle out the truth and the picture slowly falls into place. But it is not the picture anyone expects and the final reveal is in fact quite original and shocking.
I give this book a gold star for it's surprise element. And I'm sure that's why people frequently refer to it as such a great murder mystery. Poirot is an intriguing character and love him or hate him he is definitely unique. Dr. Sheppard's exasperation with his sister is written humorously and Christie is good about letting us see Poirot's reasoning unfold step by step as he confides his thoughts with James and Caroline. It is a well written novel with plenty of suspense.
Where I get bogged down is often the constant repeating of the facts and the way things are recapped again and again. This is common in mysteries I know but in this book sometimes it seemed like filler. The chapters read like little blocks of interrogation instead of a story. There is no historical angle to speak of which I admit I'm partial to in any book and it felt sometimes more like a police report than literature. But maybe I'm in the minority because clearly it is a popular book.
I'm going to try a Miss Marple mystery if I read another Christie book. Sometimes a character change can evoke an entirely different feel with the same author. I'd love to hear from the Christie fans out there who think I'm crazy! And recommendations of your favorite choices of her novels.
20th Century Agatha Christie Mysteries