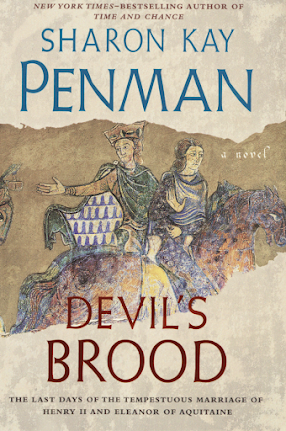 Publication Date:  October 7, 2008
Length:  753 pages
It has taken me a very long time to finish this book. Not because it isn't wonderful (it is!) and not because I wasn't excited to read it but because it really takes your full concentration. I have found this to be true with all of Penman's books but especially with this one. I also was reading the paperback copy instead of the Kindle version so I needed extra light with my old eyes. So here we are nearly six months after finishing the second book in this trilogy, Time and Chance, and I am finally reviewing book three.
Our story picks up where Time and Chance left off. Henry II is King of England and has returned from his self imposed exile in Ireland after the death of his frenemy Thomas Becket, former Archbishop of Canterbury. Henry is still trying to work through his complicated feelings about the Archbishop's friendship that turned sour after the two could not agree on how to balance church rules with divine right of Kings demands. He is feeling guilty and frustrated and needing to be redeemed from his role in Becket's death. He throws himself into the quest to create and hold onto a kingdom that he can proudly pass on to his sons, Hal, Geoffrey, and Richard. John is too little at this point but will factor in later.
Eleanor is focused on her home, the duchy of Aquitaine. She wants to bequeath it to Richard who increasingly becomes her obvious favorite of the offspring. Henry and Eleanor spend a lot of time at odds with one another about who should rule what and where and it causes continual strife within the family.  Henry errs on the side of Hal, the eldest son, whom he eventually gives the title of the Young King in order to solidify his role as heir and this causes rifts between all three sons. Eleanor is eventually imprisoned by Henry when he finds evidence of her plotting against him and there is a constant back and forth between the sons who are all scheming and plotting against one another. Add in the wives and it's a family with the dysfunction of a modern day soap opera. That is the book in a nutshell but wow does it give a lot of detail as to how it all unfolds.
I found the level of research to be truly amazing. Penman must have spent hours upon hours thinking through how each scenario must have played out between the characters because the dialogue and thoroughness is remarkable. I felt like I was actually living with these characters. Without giving away anything important let's just say that when anyone died I felt sadness and pity. More than any of her other books I've read so far I felt like I could reach into the past and really know these people. The causes of family strife are meticulously explained and developed so much so that I found myself sometimes as exasperated as if they'd been real friends and family. You can see the train wreck coming and want to shout at everyone to stop being so stubborn and get along. That is not to be.
As I've thought about writing this review I think what comes to mind is background knowledge. If you know nothing about Henry and Eleanor and their family squabbles or haven't read the first two books this might not be the place to start. You can, it just won't be as personal to you. I'd recommend either reading the first two books in the trilogy or maybe another, simpler, but still thorough book on their lives. The Courts of Love by Jean Plaidy is a great book to learn more about them before diving into this one with such detail. Setting up the background for this story would help me not to feel lost and to enjoy it. Otherwise it could be a bit tedious and boring for the casual reader.
I absolutely loved this book but it did take a lot of time and dedication to read it. Penman continues to amaze me and I am excited to read Lionheart and A King's Ransom. These two books are not technically part of the original trilogy but continue the story of Richard and his mother, Queen Eleanor. I have no doubt they will be just as amazing!
Medieval Period Plantagenets