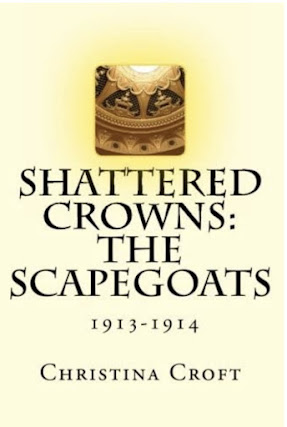 Publication Date:  July 26, 2011
Length: 360 pages
I first discovered Christina Croft when I read her biography of Princess Alice, Queen Victoria's daughter, and the mother of Tsarina Alexandra of Russia. I thought it was interesting that she had written a whole book on the subject of Alice because I hadn't found another one. With her Shattered Crowns series she takes on the subject of World War I in a unique way and is one of the few authors who has written historical fiction about the Great War that isn't straight battles and strategy. I wanted to know about the major players, their thoughts, their inner struggles, and also the why behind the causes of the war. I feel like World War II is overrepresented in print and media and World War I is often forgotten. So many people can tell you who the "bad" guys are for World War II but have almost no understanding of who they were in the first war. Croft puts a very real, human face to the monarchs and rulers of the day and how their demise came about.
The Scapegoats is part one of the series. It begins in 1913, the year before that fateful summer of 1914 and the assassination of Archduke Franz Ferdinand and his wife Sophie. Their deaths would set off a chain of events that spiral into war. Franz Ferdinand and his Uncle, Emperor Franz Josef, disagree on the marriage of Ferdinand to Sophie, a commoner, and the inability of their children to inherit the throne of Austria due to their union. It is a first glimpse into the ruling dynasties that will play a part in the story. Franz Ferdinand is the face of modernity and change while his Uncle is staunchly aligned with the past and its structured rules and norms.
Despite the fact that most of the monarchies of Europe were related through their grandmother, Queen Victoria, it does not seem to create a spirit of love and harmony.  Kaiser Wilhelm of Germany is portrayed as a man who is in constant rivalry and insecurity with his cousins, Tsar Nicholas and King George V. Queen Marie of Romania seeks to foster peace between many of her relatives to no avail.  We follow the thoughts and motivations of each as Croft skillfully switches between chapters covering differing locations. The background to the war builds throughout the book as we see conflicts between the cousins become serious breakdowns of communication and petty jealousies are resurrected. The slow burn of simmering frustration continues and though it is hoped by all that deadly conflict will be avoided, sadly it isn’t.
Croft posits a theory that Kaiser Wilhelm has been greatly maligned and that he is a sympathetic figure. She recreates his inner turmoil and desperation as he waits for his cousin Nicholas to come around to his side and way of thinking. Most of the material I had read about Wilhelm up until this book had been from the point of view of his relatives who saw him as haughty and arrogant, creating trouble wherever he went. Here he is to be pitied and seen as someone who tried everything to stop the coming conflict. It is an interesting, new way to see him. One I had never considered. Croft does an excellent job of establishing evidence for her case. I found myself researching things he said or did many times because I was surprised I hadn't heard about it before.
You really have to read all three books to appreciate this series. After book one you only reach the stalemate between Germany and Russia and aren't even fully into the war yet. The next two books will take you through the war and its aftermath. Croft's ideas about who is actually pulling the strings and why are intriguing and again, something I hadn't thought about much. Whether or not you agree with her is irrelevant because the story is compelling on its own. She makes you feel like you know these people personally and there are none who are portrayed as total villians. Rather I ended up extremely sad for all of them and for humanity, knowing that these cousins, aunts, and uncles couldn't find a way to avoid the destruction of so many lives. This was the first book on this subject that gave me a clear understanding of it all.
20th Century World War I