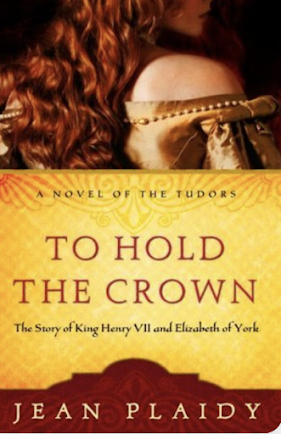 Publication Date: September 28, 1984
Length: 416 pages
I just adore Jean Plaidy. Sometimes she gets a bad rap because her books are simplistic in dialogue and don't have much in the way of fictional characters. But these things are her strengths I say. When I was in high school I wanted to learn about The Tudors and her books were so good about combining accurate facts with the feel of a novel. I went away feeling entertained yet all of it was true so I was learning so much. She has covered so many Kings and Queens from England, France, and Italy it's hard to find someone royal she hasn't written about. For some reason I had never read this book before, I'd always started with Henry VIII or Elizabeth Tudor. There just aren't many historical fiction books on Henry VII, although that is changing recently. So this one was a must read for me this year.
The story begins in 1486 at the birth of Prince Arthur to Elizabeth of York, who is now Queen Elizabeth, wife of Henry Tudor. The two mothers-in-law, Margaret Beaufort and Elizabeth Woodville are not making life easy for poor Elizabeth. Their rivalry is evident as they vie for who is the dowager Mother deserving of the respect of the court. Elizabeth gives birth amid a cloud of insecurity as to her husband's grasp on the throne but having a boy solidifies his standing a bit more and everyone breathes a sigh of relief.
Henry is always insecure about his power as King. And with good reason. At every turn it seems someone is waiting to insert an imposter into his court and to take the crown he so dearly clings to. Several subplots alternate with life at the court and include Lambert Simnel, a boy convinced he is the rightful heir, the Duke of Clarence, and Perkin Warbeck, claiming to be the long lost Richard Duke of York, one of the Princes in the Tower believed killed by his Uncle Richard. Henry is doubtful of each claimant but insecurities plague him enough to want them eradicated. While trying to rule his kingdom, fill his coffers, and convince everyone his is the rightful King he presents as a harsh, cold, distant man. Elizabeth dutifully plays her role as companion and mother to their four children and realizes her place is in supporting the joining of the Houses of Tudor and York. But she is not always happy in her new life. Her mother is always working behind the scenes to make sure their family is given their due respect.
We eventually meet Katherine of Aragon and experience life through her eyes at court as she struggles through the death of Arthur and the wooing by Young Henry Tudor. As they work to come to an understanding we see the twilight of Henry VII's reign and his life's work to hold the crown coming to fruition.
I absolutely loved this book! It is one of my favorites by Plaidy. I knew the story of the Tudors well long before I read it but somehow she always manages to add little tidbits I hadn't heard before or to insert a twist I hadn't even thought of. When I first started reading it I assumed (based on the cover) it would focus heavily on Elizabeth of York and her viewpoint. It really doesn't. We are privy to the thoughts of Henry and Katherine much more than Elizabeth and she becomes more of a minor character as the story progresses. Plaidy manages to take a story that has been retold countless times and make it seem fresh. An amazing feat considering how much material there is out there about the Tudors.
I read a review on Amazon that said though Plaidy will never be compared to a more detailed author like Sharon Penman, she has a style that is a comfortable read you can enjoy like putting on a pair of old sneakers. I couldn't agree more.
Medieval Period Tudors