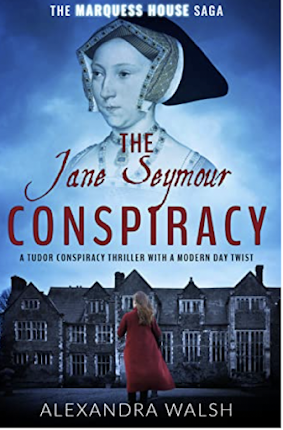 Publication Date: July 18, 2022
Length:  401 Pages
Thank you to Net Galley for loaning me this book for review.
This book looked really intriguing to me just based on the title and cover. It is the fourth in a series and usually I'm a stickler for starting with book one. But it was new and I am trying out Net Galley so I wanted to just jump in and read this one now.
The story is a time shift going back and forth between 2020 and 1527-1536. The modern day timeline consists of twin sisters Perdita and Piper who have inherited Marquess House from their now deceased grandmother and all that goes with it. The ladies, along with their love interests, have already been through the ringer with attempts on their lives and shady villians in the first three books and are now thrust into another quest for the truth that will cause them to be in grave danger again.
The story centers around Jane Seymour who comes to the court of Henry VIII as one of Katherine of Aragon's ladies in waiting. She watches as the King begins his pursuit of Anne Boleyn and his abandonment of his Queen. Jane is unaware that his eyes will eventually settle on her. The King is determined to produce a son to carry on his dynasty and the story centers around team Katherine and team Anne as the two factions work to decide who will prevail in the Tudor wars. Jane is caught in the middle as Anne's cousin and watches as the Boleyn side works behind the scenes to secure their place within the royal court.
Meanwhile, back in 2020, the sisters have found a new mystery with the arrival of The Pentagram Manuscript. They work to uncover the hidden messages inside that reveal a shocking new twist on Jane Seymour's true character and motives. It seems she may not have been the innocent, docile lady that history has recorded. Jane's role in the relationship of Henry and Anne, her own personal love story with another man and possible children of her own reveal a hidden secret that could change the course of history. Piper and Perdita are also being pursued by their crazed cousin, Xavier who is determined to see his own daughter installed as owner of Marquess House. Their lives are in danger and they have to use their wits to stay one step ahead of it all.
I enjoyed this book and thought it reminded me a bit of The DaVinci Code. It is not as in depth as that book but it has elements of the spy novel genre. Clever clues, pursuing bad guys, intelligence agencies all factor in the modern day time period and the almost too perfect to believe rescuing the main characters at every turn. The historical parts are clearly contrived although the author is accurate with dates and major events. You have to suspend belief to go along with it but it was fun to fact check and see that some of the theories about Jane might have been possible.
I found the names of the modern characters to be a bit cheesy and some of the dialogue was silly. Just when I thought it was getting really complex the sisters would share a moment that felt a bit like YA fiction. This was really the only parts of the book I objected to. There was a lot of "Perds" and "Pipes" which got annoying quickly. The mystery combined with history was fun so I didn't let the other stuff distract me from finishing it. I'm not sure if and when I'll read the other three but they look interesting. They concern mysteries involving Catherine Howard, Elizabeth Tudor, and Arbella Stuart (although I'm not familiar with her). It would also be fun to know all the details of just how the twins inherited that beautifully described mansion in the first place. I'm sure I'll read them eventually just to find out!
Medieval Period Mysteries Tudors