A Plague of Zombies by Diana Gabaldon 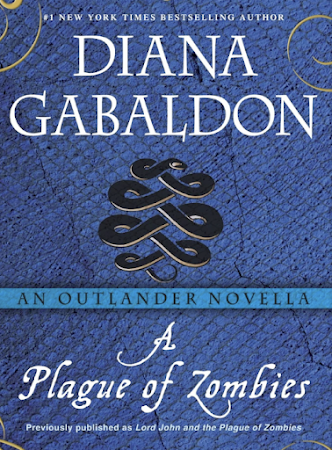 WHY I CHOSE THIS BOOK:

If you've read any of my reviews before then you know I'm a huge Outlander fan. What I probably haven't said before though is that I'm a huge Lord John Grey fan. At the risk of the wrath of fellow Outlanders out there I am going to be honest....I enjoy the character of Lord John Grey more than Jamie Fraser sometimes. He is fascinating with his aristocratic background, military prowess, and the interesting situations he always finds himself in. Many loyal Gabaldon readers don't even like or read the LJG books but I can't understand why. They fill in a lot of gaps from the big books and as the series has progressed he has become an important figure. In honor of Halloween this month I wanted to review my favorite LJG story, A Plague of Zombies. It is a novella added to her collection in the book Seven Stones to Stand or Fall, but you can buy it as a stand alone as well. The previous title was Lord John and the Plague of Zombies.  I've probably read this book at least four times and each time I do I discover something else I over looked. It is unique, creepy, and has an exotic location I absolutely love...Jamaica. So much so that when I visited Jamaica in 2019 on our cruise I couldn't get enough of the beautiful place. Having read this story before it was even more special. So Happy October and here's to many more additions to the LJG saga.

Lieutenant Colonel Lord John Grey has been sent to the island of Jamaica to help put down the restless stirrings of a slave rebellion. The current Governor Warren is only too glad to let Grey step in and take charge of the frightening situation as the rebels are slowly encroaching on the capital of Kingston, and thus ruining Warren's daily existence. A prominent plantation owner, one Mr. Abernathy, was found a few days before with his throat slit and the English slave owners are beginning to fear for their lives. As Grey tries to acclimate himself to the bug filled, creepy crawly infested surroundings, including a very unwelcome snake, he comes to realize that the superstitions and culture of the island are going to make it hard to convince the inhabitants that this is not, in fact, a matter of spiritual rituals or ghosts run amok, but rather a simple case of someone trying to use fear to channel things in their desired direction.

When Governor Warren himself is targeted and Grey is accosted by a deathly figure, Lord John realizes there is more at stake than he thought. Strange happenings continue to occur right in the Governor's mansion and then someone in the house is murdered. All seem to be connected to zombies and the supernatural but Lord John is too practical to believe it. He is definitely shaken and fearful but not enough to stop him from delving into the unknown, including pursuing information from the maroons living in the mountainous region surrounding Kingston.

As he further investigates, Grey begins to find there is a great deal of government corruption and mismanagement and that the convenient explanation of bloodthirsty zombies is a ruse. With his usual courage and insight he traces the roots of a conspiracy that is wide ranging with deadly consequences.

As I stated above I love anything Outlander and Lord John related. But I think this story was especially intriguing to me because I knew from the beginning it was a mystery with a reasonable explanation. I love authors who inject superstition into a story and make you think there is something supernatural going on, only to reveal the truth behind the curtain. This story had a touch of history as well with the addition of the maroon population. I hadn't heard of this group before reading this book and it set me on a path of discovery. When I eventually visited Jamaica it was amazing to see and tour their Rose Hall plantation and to imagine what life must have been like for the slaves who fled into the mountains to escape their horrible situation. Gabaldon's writing and historical research is always superb and my favorite thing about her is the way she assumes the reader is smart enough to figure things out without lots of specific explaining of details. Her stories always unfold piece by piece and it is up to us to put them together and figure out what is happening. Perhaps this is why I often read and re-read her books because each time I find little things I missed before.

I also love the way she infuses characters and events from the big Outlander books into the short stories. The murder of Mr. Abernathy and Grey's meeting with Geillis Duncan are exciting and creepy if you've read the first three in the series. It is fun to glimpse a little peek into a storyline that Jamie and Claire are not even a part of.

Not much! Really that it was so short. I have found myself disappointed each time I've come to the end of her novellas and would like for her to continue to write more. The Lord John bigger books are great but it seems she is done with his backstory at this point. I am hoping she will write some new stories to fill in the gaps of other minor Outlander characters.

RECOMMEND? OR NOT?  Yes, if you are an Outlander fan already. Maybe, if you are not.  I say this because at first glance this story would have seemed ridiculous to me had I not already known and loved the character of Lord John. It would be very short and very odd to the person unschooled in Outlander trivia and so I really think it's best to read the first three Outlander books before diving into the novellas.