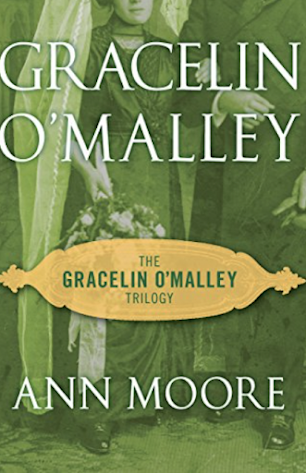 Publication Date:  January 1, 2001
Length:  400 pages
My Rating: ⭐⭐⭐⭐☆  4 out of 5 stars
WHY I CHOSE THIS BOOK:
This is one of my favorite eras to read about. The struggles of the Irish during the 1840's potato famine is a subject I never tire of learning new things about and it provides such amazing stories of heroic people living through heartbreaking conditions. Throw in the nasty English overlord and you've got a great historical fiction novel. I'm not crazy about books that are named after the main character, but that didn't stop me from trying it.
SUMMARY:
Grace is a typical country Irish girl living with her father and brothers on their family farm. Losing her mother at the age of fifteen has taken its toll on the family although they try to make the best of things. Due to difficult circumstances, Grace is forced to marry an English squire, Bram Donnelly, but her young, girlish innocence leads her to believe love will bring them a happy and fruitful marriage. Grace thinks Donnelly will save her family from ruin and is optimistic about the future. Ignoring his past and stories of his violent behavior she plunges headlong into disaster. When the potato famine arrives and threatens her beloved county and the people she's grown to know and love, Grace attempts to save them in any way she can, feeding and tending to them with concern and devotion. Her husband is not pleased and as she defies him, her safety is at risk. Dramatic events ensue as her brother and childhood friend involve themselves in the political machinations of the time and she is forced to choose between saving her family or the new life she thought she was dedicated to. Throughout it all, the famine is taking its toll on everyone and everything around them and Grace is helpless to stop it.
WHAT I LIKED:
This book incorporated a great balance of history and fiction. I learned a lot about the famine but also the politics of the Irish at the time. Using her brother, Sean, as the radical Irish revolutionary was a great contrast between Grace's more innocent, kind persona and Sean's fiery, unapologetic desire to change the status quo. When Grace is installed at Donnelly's estate I felt a sadness for her that the author invoked with the way he belittles her and kills her dreams for a happy future. The ending makes it obvious this is a sequel and it has the feel that the story is just beginning. I love that when a book can make you want to go out and immediately get the next one. The use of Irish Gaelic was a nice touch as well and phrases are sprinkled throughout the story. It is not as in depth as Outlander but it definitely has the same feel to it.
WHAT I DIDN'T LIKE:
There aren't a lot of negatives except that the character development tended to be one sided and I'd have liked to have gotten more involved with Bram's background and some of the minor characters as well. Overall it is a solid well written story though so not a lot to add here!
RECOMMEND OR NOT? ABSOLUTELY!
I think most historical fiction lovers would enjoy this book. No, it's not a deep read but certainly not YA either. Especially if you love stories about the potato famine you'd want to read it. And the sequels look interesting. I've looked ahead but won't leave spoilers here. Enjoy!