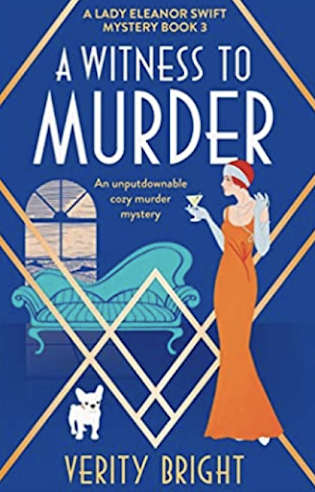 Publication Date:  September 11, 2020
Length:  264 pages
My Rating:  ⭐⭐⭐⭐☆
WHY I CHOSE THIS BOOK:
I am working my way through these books as I have a moment between longer reads. They are just so much fun and although I don't really need to do a review for each one I want to because they all have a different theme. It's fun to check in with the characters and see what new mischief they've gotten themselves into.
SUMMARY:
We find our heroine, Lady Eleanor, adjusting to her new life at Henley Hall. In the six months since arriving, she has already been instrumental in solving two murders and with the help of her much loved butler, Clifford, and her darling bulldog, Gladstone, she has created a world for herself among the people of the village of Chipstone. Ellie's parents have been missing for a number of years and she has led a life of adventure prior to returning to her late Uncle's estate to take over the running of the place. Ellie always seems to find herself embroiled in drama and this time she is contemplating a time of solace and calm, determined to stay away from dead bodies. Fate has another idea and before she knows it, she is thrust into another case: this time involving politics. It seems a local contender for Parliament has collapsed and died after eating poisoned fudge at a dinner party. Ellie tries to ignore the crime but the cook for the estate where the murder occurs is so distressed over being accused of serving the tainted fudge that she feels she owes it to the woman to step in and help clear her name. Nothing about it will be easy.
Not only is Ellie involved in solving the murder, she is asked to run for the deceased man's seat in Parliament by a local women's group. This being 1920 there isn't a lot of support for women in higher office. When she attempts to win over the local electorate she is both pleasantly accepted by some and rebuffed by those who want to maintain the status quo. As Ellie delves deeper into both the motive for the murder and making political speeches she starts to believe there is more going on than she first realized. Someone is trying to stop her and is possibly blackmailing the alleged murderer. At one point, Ellie is even accused of being involved herself. When another suspect is attacked and killed, Ellie and Clifford must hurry to unravel the clues and find the real culprit.
WHAT I LIKED:
These books are always a refreshing break from long, serious reads. This one in particular was fun with Ellie running for office and simultaneously entertaining two romances. Lancelot, a local aristocrat, and Detective Seldon vie for her attention in very different ways and it is fun to guess which one will prevail. Clifford and Gladstone are always a major part of the plot as well as the loveable staff at Henley Hall and the local townspeople. Ellie is beloved by everyone for her kindness and down to earth demeanor.
This particular book was cute with Ellie running for office and seeing her interact with the common folk in a charming way. I also discovered something that I thought was fun....each book takes place during a particular season of the year. I guess when I read the first two I didn't pay attention to the pattern. This book was set during fall and the next book is during winter with a Christmas theme. I can't wait to read it between Thanksgiving and Christmas. It will be just the thing to get into the holiday spirit.
WHAT I DIDN'T LIKE:
Sometimes I get a bit annoyed with how Ellie always seems to say and do just the right thing with everyone. She is a little too perfect with just the correct response no matter who she is with. Yes, I get it is a cozy mystery, not a period drama but....her character is a little one dimensional at times. She is clumsy and lovingly out of place as a lady of the manor and that is refreshing but she is a bit too on point with her response to each situation. Other than that there isn't much to bother me. I don't expect perfection!
RECOMMEND? OR NOT?   Yes, absolutely! If these kinds of books are your cup of tea then you will love this series. And even if you don't normally read this genre you might be pleasantly surprised to try it. The dialogue between Ellie and her butler, Clifford is clever and a cut above the average cozy mystery book.