Enemy in the House by Mignon G. Eberhart 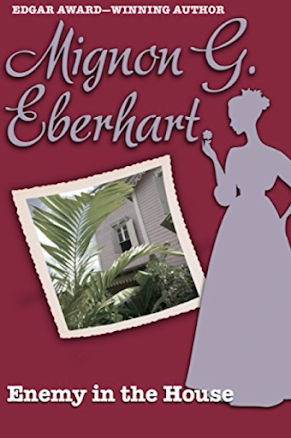 Publication Date:  January 1, 1962
Length: 216 pages
My Rating:  ⭐⭐⭐☆☆ 3 out of 5 stars
WHY I CHOSE THIS BOOK:
I absolutely love historical fiction set in the West Indies, especially Jamaica. They are hard to find, let alone find one that is also a mystery. So this book was right up my alley. Throw in that it is considered a classic, having been written in the 1960's, and I just had to read it. I also had never heard of this author and when I went to do a little research was surprised to find how many stories she penned in her lifetime. You'd think she'd be a more familiar name. Maybe the whole mystery vibe had been done so much she was just one of many by the time her books were being published. I planned for it to be an Agatha Christie type book and to some degree it is but it is also different in its own way. The book synopsis leads you to believe it will take place in South Carolina as well but I found most of the book was set in Jamaica. Which was just fine with me.
SUMMARY:
Amity Mallam is a southerner living in South Carolina during the American Revolution. Her father has fled to Jamaica, leaving her to run their plantation alone. It is a daunting task, especially since rebel leaders are bent on seizing the property of loyalists for themselves and Amity is feeling overwhelmed. To further complicate matters, Amity's father has remarried since her mother's death to a woman named China, who produces a son, her half brother Jamey. Even though her father has not changed his will and Amity continues to be the heir of the family fortune, it is problematic in that she must bear the burden of her father's absence. Her Uncle and Aunt Grappit and cousin Neville are at present living with her but known for being self serving, are not much comfort.
Even though Amity is interested in another suitor, Charles, who is China's brother and away at present, she decides to marry her rebel cousin, Simon Mallam for practical reasons, and to find out what has happened to her father. Simon professes to have loved her since they were children and Amity feels gratefulness and affection for him, if not true love. Surprising her with their unexpected arrival on the ship, China, Jamey, and Charles follow Amity as she travels to the family sugar plantation, Mallam Penn, in Jamaica. On the way, China informs Amity that the Parson who married her and Simon was found dead at the bottom of a hill with his neck broken. At first glance it would seem the Parson was the victim of a drunken accident but China reveals that the same night, the family lawyer, Mr. Benfit, was found shot to death. It seems odd and coincidental to Amity that both were present at the wedding and both are now dead.
Arriving in Jamaica, Amity discovers her Aunt, Uncle, and cousin have seemingly followed her there. She is immediately suspicious and when they tell her their news about her father she is alarmed. Her Uncle relishes in his role as Amity's paternal influence although she is less than impressed with him. He is arrogant and condescending and Amity finds herself unwilling to trust he has her best interests at heart. As mysterious happenings begin to haunt the plantation and a girl is murdered, Amity is more determined than ever to get to the bottom of what has befallen her father and to learn who might be out to sabotage her and her family. She knows the two murders back home of the pastor and the lawyer must be connected to everything else and it will take a lot of sleuthing to figure out how it all fits together.
WHAT I LIKED:
Well, obviously as I mentioned at the beginning of the post, the huge draw for me was the setting. The 18th century, American Revolution, Jamaica, haunted plantations, yes please! I also found the additional murder mystery to be intriguing and Eberhart does a skillful job of not giving the game away too quickly. I was truly lost for most of the book trying to figure things out. She added a few surprises along the way that really shocked and kept me guessing. The manners and mores of the time were adhered to well and I thought her romantic touches were nice between some of the characters.
WHAT I DIDN'T LIKE:
The ending. I hate to be so blunt and I won't give any spoilers away but so much felt unresolved. The main events were taken care of nicely but I literally turned to the last page and was shocked to find it was over. It was kind of odd. It felt a bit like a short story that had another sequel coming. There were characters that still felt in a bit of danger and you were left wondering if they made it out okay and to safety. Others were those you hoped got more of what was coming to them but unfortunately you don't get to find out. It was very strange. Almost as if the author just wanted to be done with it and hoped the reader would accept not knowing the full story.
RECOMMEND? OR NOT? Yes, with a few reservations....
If you are needing everything fully wrapped up at the end you might be a bit disappointed. But overall I liked this book. The mystery was interesting, the setting unusual, and the plot intriguing. I gave it three stars for the reasons I've already stated but still think it was great for those of us who love historical mysteries. I would like to read another one of her books to fully appreciate her writing and see if I continue to be interested.