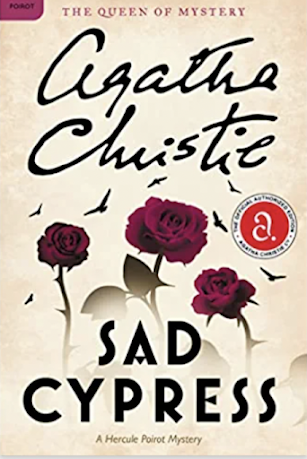 Publication Date: March 1939
Length:  256 pages
My Rating: ⭐⭐⭐⭐⭐
This was the January book for this year's Read Christie 2023 challenge and one I'd never heard of. My immediate reaction upon seeing it was that I loved the cover and the title. Sometimes that alone is enough to make me happy to read something. Silly I know, but since there are whole Instagram pages dedicated to pretty book covers, I know I'm in good company! It is short and I was able to read it within a couple of days and considering I'm a teacher who just went back this week after two lazy weeks off for Christmas, I'm pretty proud of myself to have finished it already.  The challenge is a lot of fun and I'm excited to see the upcoming books with their methods and motives theme this year. As you can see from my rating.....I absolutely loved it.
Elinor Carlisle has been accused of murdering her romantic rival, Mary Gerrard. Upon the death of Elinor's Aunt Laura, she had expected to receive a sizeable fortune and share it with the object of her desire, Roddy Welman. When Roddy becomes infatuated with Mary, Elinor sees her life plan going up in smoke. Wishing her dead, Elinor is nonetheless in shock to find Mary actually deceased from an overdose of what appears to be morphine. The nurse caring for her sickly aunt believes it is the vial she misplaced and as events unfold, Elinor is accused of deliberately lacing sandwiches Mary ate with the lethal dose. Because so many could also have had access to the vial there are many theories as to who could have done it and why, but Elinor seems to be the most likely culprit.
Hercule Poirot is called in to investigate the case by Aunt Laura's physician who is in love with Elinor. He is unsure of her guilt but doesn't care as long as Poirot can find some means of assuring her acquittal. Poirot agrees to consult but only to find out the truth, whether it exonerates Elinor or otherwise. He begins by questioning all involved including Elinor, Roddy, the Nurse, and Peter Lord, the physician. As he continues to uncover the clues to the real murderer, Poirot begins to wonder if one of the players is not actually who they claim to be. And if that may be the motive behind the crime itself.
This story is the first Christie novel in which there is a reveal through courtroom drama. It had a different feel to it because of that and it reminded me more of today's crime novels. There are three parts to the book: the crime, the interrogation of the suspects by Poirot, and the courtroom testimony. I liked how this was organized as it gave a clear picture of each person's involvement, culminating with an air of excitement "down to the wire" for Elinor's fate.
Poirot does not come into the book until the middle part and so the first is slow building with character development of the suspects and their thoughts. I liked how we enter Elinor's head quite often and could really sense her bewilderment at what she'd been conspiring with what actually happened. For the reader it created a sense of sympathy for her and made me root for the truth to be exposed.
This was a really good mystery plot and had an interesting conclusion. There were some medical elements that made it hard to figure out and kept me guessing for sure. I enjoyed it immensely and am now looking forward to February's Christie book.