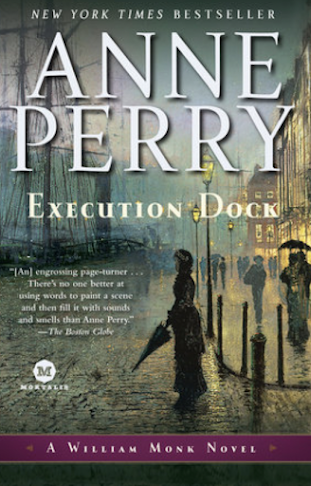 Looking back through my blog posts I was astounded to realize I hadn't read and reviewed a William Monk book at all yet. And even though one of my goals this year is to try to read new authors, I couldn't resist checking in with William and Hester to see what they are doing next. Execution Dock is book 16 in Perry's popular Monk series. I have been steadily reading them for years now and like to go in order because even though her books can stand alone as far as the mystery narrative, you get more out of the books if you understand the background of the leading characters.

The book opens with our hero Monk, now Commander of London’s River Police, attempting to catch Jericho Phillips, a shady underworld figure who traffics in child exploitation. When he and his men succeed in bringing him in, they are elated and look forward to seeing justice served. But when Phillips is set free for a crime Monk is sure he's guilty of, everyone involved in his capture is outraged. It soon becomes apparent that high society is participating in the charade and that behind the scenes there are powerful people that don't want Phillips talking, mostly because they themselves seem to be benefiting from the abuse of the children.

Monk's wife Hester runs a clinic for the poor women who prostitute themselves and live desperate lives. She and Monk have taken a street orphan, Scuff, under their wing, who is about the same age as Phillips' murdered victim. Drawing on information obtained from local boys Scuff knows and carefully putting together clues gleamed from those who will talk, Hester and her friend Claudine attempt to find evidence of either Phillips's guilt or those who buy his wares. During their investigation it comes to light that a relative of one of Monk and Hester's friends might be part of the clientele and they must decide how to handle the explosive information.

Meanwhile, Oliver Rathbone, prominent barrister and friend of the Monks is wrestling with doubts of his own. Originally tasked with prosecuting Phillips, Rathbone is on the outs with his former friends due to his questioning of Monk on the stand and his apparent insinuations that Monk's motives were not the purest in his attempt at arresting Phillips. Fears that their friendship is irreparably damaged leads to a frosty stalemate between the Monks and Oliver and his wife, Margaret. But they will all have to come together in the end if they are to find a way to finally apprehend Phillips for his heinous crimes.

I read some reviews on this book that said it really bothered them and that they had to recover from the seediness of the story. While there is no doubt that it is heavy, depressing material at times, I didn't think it was much different from other Anne Perry stories that have similar content. She is known for really creating an authentic, detailed setting of Victorian England, warts and all and here she shines in her vivid descriptions of the worst criminal elements of society. I think her books involving the abuse of children hit hardest for most people and so I'm sure that is what they are reacting to. That is totally understandable. But because her books always contain the good versus evil element with evil getting its just reward in the end, I don't feel so down at the conclusion of most of her books. I have felt this way much more so in her Christmas stories because those are supposed to take place during a happy, upbeat time of year and often include sad storylines as well.

This was one of the better Monk stories for me in that I enjoyed the dynamic between Rathbone and his wife's family as well as the conflict between the Rathbones and Monks. Over time the men have forged a shaky friendship (each had their sights set on Hester at one point) and it added to the suspense to see how they would handle their disagreement. The courtroom scenes were well written as always and the down to the wire ending was captivating. Perry does have a habit of repeating herself and doing a bit too much pondering inside the characters heads sometimes but I guess I've kind of grown used to her style. A solid continuation of this series and I will continue with the next one for sure.