It's time for another Can't Wait Wednesday hosted by Tressa at WishfulEndings. I love this weekly post because it is simple yet productive in that it promotes up and coming books and authors who are publishing something in the next few months. I love going onto NetGalley and seeing great books and being able to share the ones I'm excited about. This week I have chosen a non-fiction book that looks fascinating to me. It's The Granddaughters of Edward III by Kathryn Warner.
I think the Edward eras are often overlooked due to the overabundance of literature and history on the Tudors and Victoria. So anytime I see a story about them I'm usually interested. The fact that this book zeros in on the women descendants makes this book very appealing. I will definitely be looking forward to it!
February 28, 2023
*I'm only finding it for sale in the UK so that might be a bit of an issue. Hopefully it will be available in the US on Amazon Kindle soon.
Biographies/Memoirs/History
232 pages 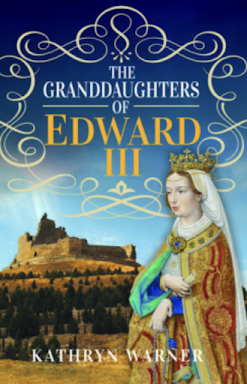 Book description courtesy of NetGalley
Edward III may be known for his restoration of English kingly authority after the disastrous and mysterious fall of his father, Edward II, and eventual demise of his mother, Queen Isabella. It was Edward III who arguably put England on the map as a military might. This show of power and strength was not simply through developments in government, success in warfare or the establishment of the Order of the Garter, which fused ideals of chivalry and national identity to form camaraderie between king and peerage. The expansion of England as a formidable European powerhouse was also achieved through the traditional lines of political marriages, particularly those of the king of England’s own granddaughters.

This is a joint biography of nine of those women who lived between 1355 and 1440, and their dramatic, turbulent lives. One was queen of Portugal and was the mother of the Illustrious Generation; one married into the family of her parents' deadly enemies and became queen of Castile; one became pregnant by the king of England's half-brother while married to someone else, and her third husband was imprisoned for marrying her without permission; one was widowed at about 24 when her husband was summarily beheaded by a mob, and some years later bore an illegitimate daughter to an earl; one saw her marriage annulled so that her husband could marry a Bohemian lady-in-waiting; one was born illegitimate, had sixteen children, and was the grandmother of two kings of England.