This week's Can't Wait Wednesday, hosted by Tressa at WishfulEndings, is the seventh book in David Field's Medieval Saga Series. I haven't read any of his works yet so I can't recommend them but when I saw this story has Simon de Montfort as the main character, I was intrigued. You don't see much of him in literature aside from Penman's Falls the Shadow. I'm interested enough to put it in my TBR pile.
I also really enjoy series that take historical facts and real people and make them the basis of the story rather than fictional characters. It's such a great way to learn and retain historical facts in an interesting way. This series takes you from the Norman Conquest through the end of Henry III's reign.
March 17, 2023
Historical Fiction 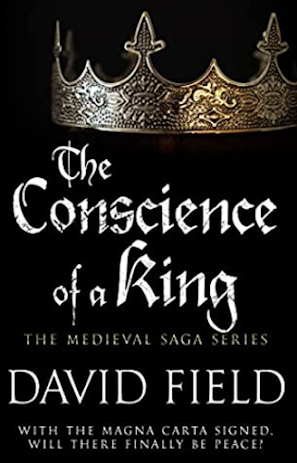 Book description courtesy of Amazon
England, 1229
After fighting in the Albigensian Crusade in France, Simon de Montfort – a landless nobleman – arrives at the court of Henry III, hoping to re-establish his family’s claim to the Earldom of Leicester.
In pursuit of his goal, Simon soon proves his value to Henry as a military leader and political advisor, becoming one of the king’s most trusted men.
But discontent is building within the English court. Frustrated by the king’s preference for foreign nobles and his extortionate taxes to fund wars abroad, the leading barons are constantly on the edge of rebellion.
As a man with a strong sense of justice, Simon is dismayed by Henry’s treatment of the common people and the corruptibility of the English legal system. And as the barons’ anger seems set to boil over into armed conflict, Simon must search his conscience and decide how far he is willing to go to bring about reform…
Can Simon restore his family’s fortunes? Can he help lead England into a new golden age while retaining the king’s favour?
Or will his principles cost him his life…?
The Conscience of a King is the seventh historical novel in The Medieval Saga Series – thrilling action-packed adventures set during and after the Norman Conquest.