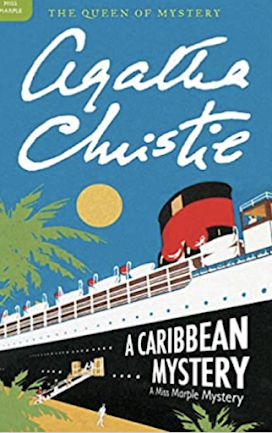 Publication Date: November 16, 1954
Length: 240 pages
My Rating: ⭐⭐⭐☆☆
WHY I CHOSE THIS BOOK:
I'm a sucker for covers with palm trees, sun, and cruise ships. It just says summer and relaxation and if you throw in a mystery it makes it even better! This book has sat in my TBR pile on my Kindle for years. I just kept thinking I'd read it on a beach vacation and never did. So I decided I was going to just read it already, beach or no beach.
This was my first Miss Marple book and some reviews said I shouldn't read this one first, that her earlier ones were better. I don't have anything to compare it with so I plan to read the first Miss Marple book soon to see whether or not I agree. This book was a cute, light fun read and after And Then There Were None, I wasn't sure what to expect. That book freaked me out! Miss Marple is so cute and charming and laid back that I'd classify her as a character more of the cozy mystery genre.
SUMMARY:
In this story, our heroine is trying to just relax and bask in the glory of her trip to the tropics, courtesy of her nephew, Raymond.  She is patiently listening to an elderly man, Major Palgrave, tell her about life and drone on with his uninteresting personal stories. He mentions that he possesses a photograph of a murderer and although this is interesting, until he dies suddenly, Miss Marple isn't too concerned. Her suspicions are aroused because she finds his death to be odd considering it happened so unexpectedly. Consulting the local doctor only increases her awareness that things aren't as they seem. And everyone thinks they remember the Major having health issues, such as high blood pressure, but as no one at the hotel enjoyed his company, there weren't many that called him friend enough to be sure.
When a hotel worker is killed, the patrons begin to reassess their time on the island and some leave. Miss Marple previously befriended several couples at the hotel, the Hillingdons, the Dysons, and the Kendals, who are running the establishment. All colorful guests with their own secrets make for serious sleuthing on the part of Miss Maple to identify whether or not they would have turned on the Major, the hotel worker, or each other. Eventually one of them becomes the third victim. It is obvious to Miss Marple that the deaths are definitely not random events. She sets her mind to carefully examining the clues in order to solve the case. Working through the physical as well as the psychological evidence requires patience and tenacity and she is just the lady for the job.
WHAT I LIKED:
Miss Marple is charming in that grandmotherly way and I really enjoy stories where the character is elderly and sharp as a tack, but others don't realize it. When she solves the riddle and everyone is enlightened as to her true intellect it is satisfying. For this reason alone I will continue reading more of the Miss Marple series starting with the first book. I have a feeling she is going to grow on me!
WHAT I DIDN'T LIKE:
I admit I'm still adjusting to Christie's style. She likes a lot of dialogue it seems and we work through a lot of the internal musings of Miss Marple, the doctor, and some minor characters. The chapters are very short, as is the book, so she does pack a lot into 200 or so pages. Because she is such an icon in the mystery genre I'm still willing to continue trying different selections of hers to see which ones I really enjoy. This one was probably a 6 out 10 on a scale of excitement for me and although it wasn't as good as And Then There Were None, I can appreciate that the character of Jane Marple exudes a different style entirely. It flows a bit slower, more thoughtfully, and isn't given to shock value. Rather the information is revealed bit by bit as we journey with her mind.
RECOMMEND OR NOT?  Yes, it's worth it. The setting and characters make up for any major flaws and if you like Agatha Christie type books you'll enjoy this one.
Agatha Christie Cozy Mystery Mysteries