Queen of Swords by Judith Tarr 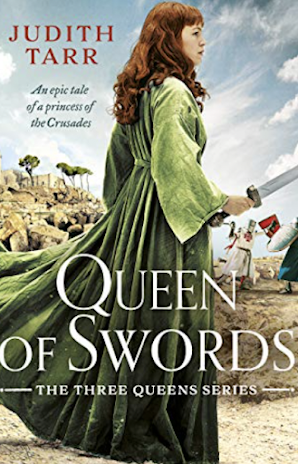 WHY I CHOSE THIS BOOK:

This was the first Judith Tarr novel I'd run across. It looked interesting and I hadn't found another book concerning Queen Melisende of Jerusalem that was historical fiction. Also, it is part of a trilogy about Melisende, Cleopatra, and Theophano (I'd never even heard of her!) Judith Tarr has a Ph.D. in Medieval Studies, not something to be taken lightly when considering whether she has the background knowledge to write about the time period. So I was excited to try this book out. I was surprised to find out it was written in 1997 and I'd never seen it before. I settled in to read all about Melisende and her life in novel form.

I got about a third of the way through it and realized that strangely enough it wasn't really Melisende who took center stage. It was the fictional character, Richildis, and her fictional family. That would be fine in a historical fiction novel so I found it a bit odd that the book was subtitled "An Epic Tale of the Princess of the Crusades" and that the book jacket talks all about how it is a story about Melisende. It really isn't at all. She doesn't even appear all throughout the book. Nevertheless I decided to keep reading assuming the story would still cover the time period in an interesting way.

In Jerusalem in the early 1100's, Lady Richildis has arrived to try and convince her brother, Bertrand, to return with her to France and reclaim his lands and home, La Foret. Bertrand, who is firmly dedicated to his life in Jerusalem, is adamant that he will not return with her and immediately sets about creating a life for his sister in the Crusader states. Richildis is at first homesick and bewildered by the difference in culture, the heat, the style of dress, food, and all the opulence found in the Middle East. She wants to return home as quickly as possible but has vowed not to do so without her brother. Before long though she is settled in the household of Melisende as an attendant and begins to adjust and even enjoy her new life. Still dreaming of returning to France one day, she tries to accept that for now she is stuck in a foreign land under the care of others.

Melisende, wed to Fulk of Anjou, is frustrated in her role as wife and mother. She has ambitions beyond her household and through her birthright believes she has the better claim on ruling than her Frankish husband. Born into an influential family, but being female, she is unable to fully realize her autonomy as ruler although she is given more say in diplomacy than most women of her day. Richildis, witnessing the daily frustrations of the Queen, becomes a trusted confidant. She is one of the few around Melisende able to break through her rather cold and dominating personality.

Meanwhile, Bertrand has made a secret life for himself with Courtesan, Helena. Unable to fully commit to one another initially, they spend their days dancing around their true feelings. When an unexpected event occurs, they both find themselves at odds with each other and what to do about their future. Richildis also begins a love affair with a Byzantine nobleman, Michael, someone who is so radically different from her in background and breeding that it seems impossible they will ever make a life together. The two couples spend a good deal of time coming together and falling apart before finally reconciling their futures.

Of course as the novel takes place across a span of twenty years, much is happening in the Crusader states around them. Beginning in the year 1129 and ending in 1153, the characters are taken on several journeys that include the second crusade and time spent with real life figures, Eleanor of Aquitaine and King Louis of France. There are several famous battles and political events dramatized. The childhood and move into young adulthood of Melisende's sons Baldwin and Amalric are portrayed along with their fictional childhood companion, Arslan and as the novel draws to a close we are left wondering what becomes of them all.

This book kind of had to grow on me. My initial disappointment that it wasn't really about Melisende made it hard to shift gears. Because my favorite kind of historical fiction centers around real people, I have to be prepared to accept fictional characters as the focus. It took a bit of further reading but I came to enjoy Richildis, Michael, Bertrand, and Helena's stories. Tarr creates compelling background, dialogue, and culture so that they seem authentic for the time. I especially liked how she chose to have Michael come from an entirely different background than the others and as their relationship progresses, he and Richilidis have to learn to accept suspicion from all sides.

The descriptions of life in Jerusalem and the battles and political drama of the day are nicely detailed although if you are looking for a book with lots of action, this is not the one to choose. It centers around the character relationships and war and fighting take a backseat to personal dramas.

The negatives for this book for me include her depiction of Eleanor of Aquitaine and the length of the book. I felt Eleanor was the one character she presented as one dimensional and cold, conniving, and scheming. It was one of the few books in which I walked away not liking her character at all. This is odd because I have always found her to be multi layered and fascinating. Here she seems selfish and immature. Not at all how I envision her but maybe Tarr is onto something? After all, she has the Ph.D. in this area! The book is quite long and there were times it dragged a bit. I think some of the personal interactions between the couples could have been cut down and more history included. But it is just a quirk of style and I still learned a lot and was entertained.

RECOMMEND OR NOT?  MOSTLY YES

I would recommend this book if you are interested in this time period and want a rich picture of Jerusalem during the Crusader states' glory days. I find precious few books on this time period as it is so I admire Tarr for tackling the subject.