Murder At the Breakers (A Gilded Newport Mystery) by Alyssa Maxwell 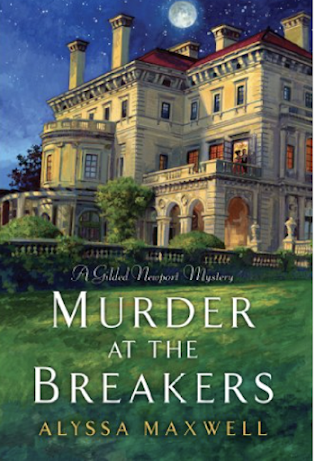 Publication Date:  March 25, 2014
Length:  304 pages
My Rating: ⭐⭐⭐☆☆  3 out of 5 stars
WHY I CHOSE THIS BOOK:
This was a new author for me and there are several sequels to this series, so I was excited to read this book. The cover and title looked really intriguing too and I just love all things Newport and Gilded Age themed! This book takes the well known Vanderbilt family and adds a fictional character, murder mystery, and internal drama. It's a great premise with lots of potential.
SUMMARY:
It's 1895 in Newport, Rhode Island and Emma Cross is going to be attending a ball at the home of her distant cousin, Cornelius Vanderbilt. Emma loves her family but shuns the high society snobbery she is unwillingly a part of and walks the line between attending necessary functions and keeping her day job. Unusual for her time, she insists on her independence and because her parents are often absent and abroad living the wandering, European lifestyle, Emma has gotten used to being her own woman. Her brother Brady is a different story. He is often in some sort of trouble and has had problems getting along in life. When he is accused of murdering Cornelius's secretary, Emma vows to do everything she can to clear his name. The fact that he is found passed out in an upstairs room with a bottle of bourbon and stolen railroad documents beside him makes this quite challenging. The victim plunged to his death off the balcony and everyone is sure Brady is the culprit.
As Emma begins to work on unraveling clues to the identity of the real killer, she encounters another reporter, Derrick, who at first appears to be a bit shady. Delving further into the case, he becomes her trusted ally and the two work together to help exonerate Brady. Along with more Vanderbilt relatives and her faithful Nanny, who has been with her forever, she has lots of support. But the facts are damaging and it is not easy to convince the police and sometimes herself that Brady is innocent.
WHAT I LIKED:
This story starts strong and has a good mystery. It kept me guessing and I didn't figure it out until it was revealed at the end. The descriptions of Newport high society, the ball, homes, clothes, and mannerisms were captivating enough to keep me reading. It was rich with details in many of these areas and it felt like the author had a good, personal grasp on the city and its history. Reading about the intricate details of the Breakers and the Cliffs around it were informational to me as I had no background knowledge of the area. I liked that she included the real Vanderbilt family and their famous home as the backdrop for the murder. That is my kind of historical murder mystery.
WHAT I DIDN'T LIKE:
If I'm writing an honest review I'd say that the negatives were that the author has too many modern day sensibilities infused in the dialogue and storyline of Emma. Things she says and does often don't ring true for someone raised in her time period and atmosphere. She is independent to a fault in that she states this way too many times throughout the story. Her determination to not fall into the trappings of high society and her relatives' money are admirable but unlikely for a young lady of this era. I know there are always rare exceptions but I'd have felt more authenticity if she'd had a little humility about her situation and the help offered by her family. She simultaneously scorns them while also using them to cover stories for her newspaper articles. This seems a bit disingenuous for a fiercely independent lady. I think I'm just weary of this kind of female character in historical novels and would like authors to accept that it's okay to have old fashioned values in a story taking place over a hundred years ago. This would greatly contribute to the feeling of the era.
RECOMMEND OR NOT?  MOSTLY YES- It isn't entirely my cup of tea but it's not a bad read
I'm honestly not sure when I will read the next book. It is just interesting enough to try again but the modern voice puts a damper on things. Maybe it will improve as the series progresses so it's always good to give it another try when I'm not sure. And cozy mysteries are just good for the soul when you need some levity in this world!
19th Century Cozy Mystery Mysteries