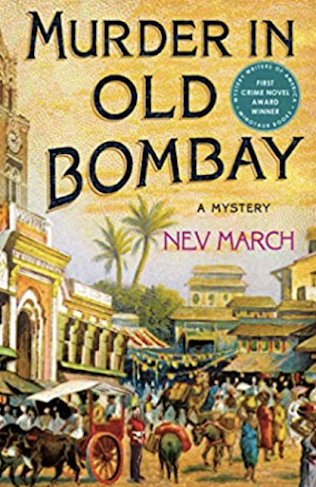 Publication Date:  November 10, 2020
Length:  400 pages
My Rating: ⭐⭐☆☆☆
WHY I CHOSE THIS BOOK:
I was intrigued enough to read this book based on the title and cover alone. I have only found one historical fiction mystery set in this time period and location prior to this novel and I loved that one. It was Anne Perry's Christmas mystery A Christmas Garland.  It is a rare find for those who love books set during the British rule of India. When I ran across this book I was so excited to see another author tackling this era. Even more so because this author grew up in India and has the cultural background to write authentically about that part of the world. She would definitely be able to add details others might not. Unfortunately, about halfway through it just ran out of steam and I disappointingly found myself skimming just to finish it. A bit of a letdown to say the least. I will try to summarize the main points and explain but the truth is that I grew bored of the characters and it just didn't hold my attention.
SUMMARY:
Captain James (Jim) Agnihotri is convalescing from injuries sustained in battle. The year is 1892 and he is in a military hospital unsure what to do beyond healing and recuperating. He comes across a news article about two young women who fell to their death from a university clock tower. He has always been partial to Sherlock Holmes mysteries and this tragedy intrigues him due to its shocking and unusual nature as well as the fact that no person of interest has been charged with the crime. He befriends the husband and brother, Adi, of the two women who died and is asked to help with the case. He meets Diana, another of Adi's sisters, and is enchanted with her. Because Jim is half Indian and half English he knows their relationship will never progress beyond friendship but nevertheless he is drawn to her and it seems she is drawn to him. Both Adi and Diana are grieving for their relatives and angry that the case is being presented as suicide.
Jim, often with Diana and Adi's assistance, begins to unravel the clues known so far. An argument witnessed just prior to the death of the women, the medical reports of the bodies, and strange occurrences happening at the home of the family begin to convince him there is more to the story than originally thought. As he gets to know the family intimately he starts to believe there are secrets that are being kept which will lead to the killer. And that not everyone involved wants the world to know the truth.
WHAT I LIKED:
Lest I leave the impression that this book has zero good qualities, there are some positive points. It has a solid beginning, believable dialogue and setting as well as an intriguing mystery plot to start it off. In fact, I finished it two weeks ago and hesitated to write this review because I was torn whether to just skip a review or go ahead and write about it, knowing the enthusiasm just wasn't there. But I decided to remember you can't just discuss books you absolutely love and that the tepid ones need to be honestly discussed as well. And tepid is what comes to mind when I think about this book.
WHAT I DIDN'T LIKE:
After a strong beginning it just sort of starts to drag. The mystery is still interesting and the characters have authentic interactions but it felt like there just wasn't enough happening to hold my interest. Scenes felt repeated and moments of action were too few and far between. Sometimes the family discussions were downright boring and seemed to go nowhere. Being a history buff and loving the time period, I wanted to know more about Bombay and the people, culture, and mores. Often I'd read whole sections and forget it was even set in the past. The conclusion was dragged out and anti-climactic.
RECOMMEND OR NOT? Unfortunately, this one is a no....
There is a sequel to the story and the author has plans to continue with several more. I love to read series books and wish this one had grabbed my attention more. Normally I'd want to see what is happening with the characters and continue but if I'm honest I probably won't pick up the next one. I'm always willing to give authors a second chance though so if she decides to start a different series with a new angle I'd probably give it a whirl. But for now, Jim and Diana will have to go on without me!