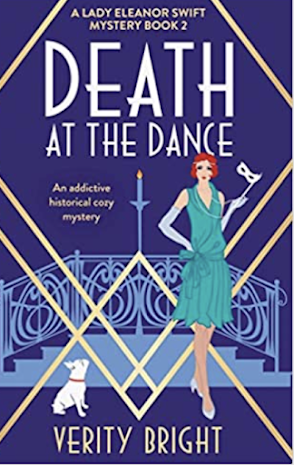 Publication Date: July 6, 2020
Length: 274 pages
My Rating:  ⭐⭐⭐⭐☆  4 out of 5 stars
WHY I CHOSE THIS BOOK:
This series is becoming my favorite time out from long, heavy books. That isn't to say it isn't clever and well written because it is, but rather it is a nice uplifting way to spend a few days with a fun read. I didn't plan to review book two so soon but I got a break between other, longer books and decided I had to see what Ellie and Clifford were up to. Also, I shared my review of book one with the author and received a kind reply. So that was nice!
SUMMARY:
Death at the Dance picks up shortly after A Very English Murder. Ellie is just settling into life at Henley Hall and starting to feel part of the community. After her dazzling display of detective skills in catching the murderer of the man at the quarry she is perplexed to find herself involved yet again in another case. Who would have thought? While attending a masquerade party at her new squeeze's mansion, she encounters a dead body, upstairs with her love interest, Lance Fenwick-Langham, standing over the corpse holding a candlestick and the family jewel safe wide open. It looks bad. Really, really bad. Ellie doesn't quite know what to think, but her affection for Lance and his family cause her to delve into the how and the why and to vigorously defend Lance from accusers.
Of course her trusty butler, Clifford, and her loyal bulldog, Gladstone are on the case too. Clifford retains his stiff, yet loving demeanor and advises Ellie how to go about inserting herself into Lance's group of friends, whom Ellie has not gotten to know well yet. They are a hard partying, drinking, expensive crowd of poor little rich society, young adults who live to torment one another and spend Mother and Father's money. While they are sympathetic to Lance's predicament and want him released from jail as soon as possible, they don't slow down with their wild lifestyle. Ellie begins to attend parties and nightclubs and even treasure hunts that last all night in an attempt to see if one of them might be holding a grudge against Lance or the deceased. She hopes to find out if they might have seen or heard something the night of the murder that will help exonerate him.
Just when she is beginning to make progress with the group, one of them dies in a mysterious car accident. While it appears to be an innocent coincidence on the surface, Ellie senses something more. The dead friend seemed to have been a bit of a misfit with the group and unhappy in their role as the friend without a major trust fund at their disposal. Now simultaneously investigating both suspicious deaths, along with auditioning for the local theater club, Ellie has her hands and social calendar full. And it is about to intensify as there are more sinister events to come.
WHAT I LIKED:
Being someone who loves history and mysteries this book appeals to me. But being someone who needs some depth to her stories I was afraid it wouldn't deliver. It honestly has both. While I love cozy mysteries, often I give up on them if the dialogue is too simplistic or the atmosphere is not realistically historic enough. If you keep reading this series you find that there is a subtle wit there that keeps you chuckling and the author does a good job of adding little touches that make you feel like you've landed in the suggested time period. Descriptions of clothes, the way the staff interacts, the way the bars and dancing are described all align with my vision of how the early 20th century wealthy class might have lived. Clifford, Ellie, and Lance all speak and behave in a way consistent with how I picture them if they stepped out of a cute English village and the mystery is revealed slowly but with enough intrigue to keep me guessing.
WHAT I DIDN'T LIKE:
Sometimes the story was a little simplistic for my taste and it certainly isn't an intellectual book. But that isn't the audience it's written for so there really isn't much to complain about. It's just a cute, fun read!
RECOMMEND OR NOT?  YES!
In some ways I found this to be better than book one. It seemed cleverer and more realistic to the setting. I found it harder to guess at the culprit and it reminds me of a lighter, funnier Agatha Christie novel or a Father Brown story.  I want to continue with the series as each book seems to have a different vibe based on the titles. But it's nice to know the same basic characters will be present. It's a great read when you just want something short but entertaining.
20th Century Cozy Mystery Mysteries