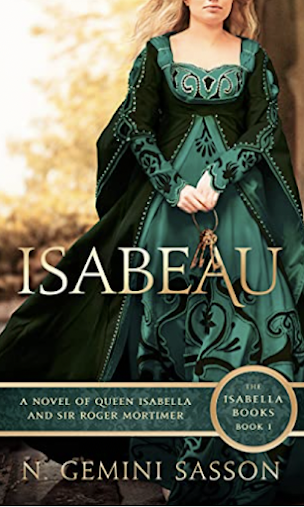 Publication Date:  September 7, 2010
Length:  428 Pages
My Rating: ⭐⭐⭐☆☆
WHY I CHOSE THIS BOOK:
This was my second book to read by N. Gemini Sasson. I previously reviewed her book about Owain Glyndwr of Wales and it was one of the only books about him I've seen in novel form. Likewise, I haven't seen much about Isabella in fiction and honestly not much about Edward II or Roger Mortimer either. All of these people are new material for me as I don't know much about the three Edwards or the 1300's in general. Listening to the History of England podcast I'm up to this time period and their story sounded fascinating. So I thought I'd give this book a try.
SUMMARY:
Our story opens in 1308 as the young Isabella of Boulogne, France is wed to Edward II of England. She is 12, he is 23 and a new King, unimpressed with his child bride. He presents as a brooding, unattentive husband and Isabella hopes with time this will change. Edward is easily influenced by those around him who are charming and take the upper hand, as his insecurities create a neediness for someone to guide him. When a current favorite of his, Piers Gaveston, is murdered, Edward goes into deep mourning. Although they manage to produce four children, Isabella long suspects his attraction to his male favorites is beyond the normal bounds of friendship. When Edward attaches himself to yet another companion, one Hugh Despenser, she is afraid her influence over him and their children is waning with each passing day. Edward seems unconcerned for her welfare beyond what will obtain him the approval of Despenser. He is a scheming, selfish man who has no interest in Isabella other than to torment her with his plans to control Edward and the kingdom. When Isabella relies on help from Edward during a precarious altercation with the Scots, she is devastated to find he is unwilling to come to her rescue in a timely fashion and she barely escapes with her life.
Enter Sir Roger Mortimer, a nobleman and marcher Lord who has become a battle hardened warrior leading the baron's revolt against Despenser and the King. He is captured along with his Uncle and with Isabella's help he escapes to France. As things between Isabella and Edward continue to deteriorate, her children are taken from her and put into the care of the Despensers. Isabella is ordered to France to negotiate a peace between Edward and her brother Charles. As she spends her time in France with Mortimer, Isabella finds her attraction to him growing and it is reciprocated. Soon the two devise a way to exact justice and revenge on their enemies back in England and will lead an army to depose the King.
WHAT I LIKED:
I enjoyed learning about the main characters in this book since I knew so little of their lives and how they came to control England through Isabella's son, Edward III. The story was engaging and historically accurate, which I love in a good historical fiction novel. Each time I researched something I found the author had done her research and stayed true to the facts. Some things had to be hinted at due to lack of proof, i.e., whether or not Edward was in fact in a sexual relationship with Gaveston and Despenser, but historians have long disagreed about this topic. It is understandable that Sasson would have Isabella arrive at that conclusion as the interactions of the men must certainly have seemed at least somewhat suspicious, even for the middle ages. The descriptions of the people, customs, dress, castles, and battles are interesting and authentic. Sasson does a good job immersing the reader in the time period and is gritty when necessary. The description of Mortimer and his Uncle during their imprisonment was difficult to read and downright depressing. But this is what makes it such an accurate depiction. The story moves along at a good pace and one is able to understand what is happening without getting too bogged down with extraneous details.
WHAT I DIDN'T LIKE:
There wasn't much in the way of character development and I found myself unable to get into the mind of especially Edward and Despenser. I felt like they were very one dimensional and there wasn't enough back story as to how the two became so involved. I wanted to know more about the initial lead up to the conflict between the Despensers and Isabella specifically and I came away still not feeling much of a connection to any of them. The same can be said of all the characters although I probably felt more of an in depth knowledge of Mortimer than anyone else. The book switches back and forth in first person between Isabella's and Mortimer's experiences and although I didn't mind that it felt like I sometimes didn't get enough time with each one. Just when I'd get a good grasp into the mind of one it would switch. For this story it just didn't work well.
RECOMMEND? OR NOT?      Yes, I still recommend it.  It is a solidly researched book about a rarely covered period. Sasson's books usually tackle these more obscure figures in history and so I want to support them. I gave it three out of five stars because I felt it was just that: not spectacular, yet worth a read. You will learn a lot and come away with an understanding of the basic facts of Isabella and Mortimer's alliance and subsequent control of England.