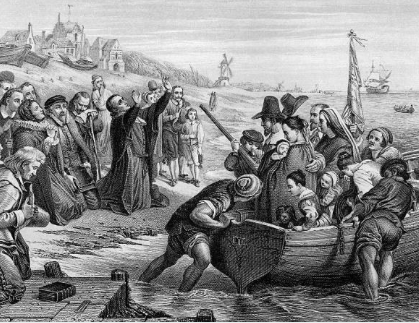 I love Thanksgiving. I love celebrating the day with family and not having to make presents and Santa the focus. Halloween is over, it's fall, and the Christmas madness has not descended upon us yet. I'm also a proud American who loves to remember the good things about our country and the pioneer spirit of the Pilgrims and those who came after them are always a great place to find amazing stories. Here are a few I've read and a few I'd like to read. Happy Thanksgiving everyone! 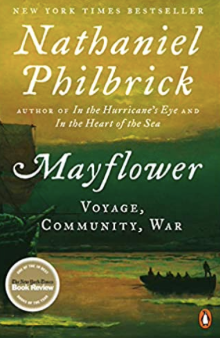 Mayflower by Nathaniel Philbrick
Amazon Synopsis:
How did America begin? That simple question launches the acclaimed author of In the Hurricane's Eye and Valiant Ambition on an extraordinary journey to understand the truth behind our most sacred national myth: the voyage of the Mayflower and the settlement of Plymouth Colony. As Philbrick reveals in this electrifying history of the Pilgrims, the story of Plymouth Colony was a fifty-five year epic that began in peril and ended in war. New England erupted into a bloody conflict that nearly wiped out the English colonists and natives alike. These events shaped the existing communites and the country that would grow from them. 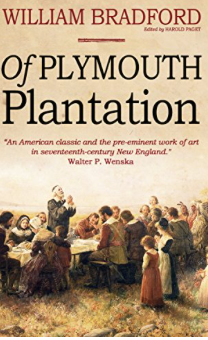 Of Plymouth Plantation by William Bradford
Amazon Synopsis:
These men, women and children, who became known as the Pilgrims, would found the Plymouth Colony. They had to survive harsh winters, poor harvests, disease and famine in the early years of their new settlement. These struggles were only exacerbated by conflicts they had with other English settlements, French settlers and against Native Americans. But they persevered in what has become one of the most iconic periods in the history of the United States. William Bradford, who was Plymouth Colony Governor five times for a period of nearly thirty years, recorded a detailed history of this settlement and the lives of its colonists in his Of Plymouth Plantation. 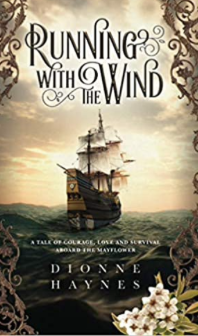 Running With the Wind by Dionne Haynes

Jedediah Trelawney joins a small, overcrowded ship bound for America. A young man from a privileged background, he struggles to adapt to life at sea. Determined to earn the respect of his fellow passengers, he undertakes arduous tasks alongside the crew, but Jed is not cut out for the life of a sailor. Sickness is rife aboard the Mayflower. Inspired by Samuel Fuller, a self-taught physician, Jed develops a fascination with the healing arts. He thrives as Doctor Fuller’s apprentice and challenges traditional ideas, seeking kinder methods for treating the sick. Smitten by Desire Minter, Jed dreams of a future as a respected colony physician with Desire as his wife. Hostile passenger, John Billington, has other ideas. When Billington threatens to reveal Jed’s past, Jed becomes the victim of bullying and bribery. Somehow, Jed must silence Billington for good, or risk losing everything — including his life. A page-turning tale about ordinary people in extraordinary circumstances. 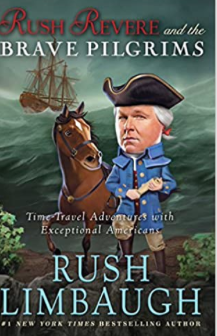 Rush Revere and the Brave Pilgrims  by Rush Limbaugh

Okay, okay, my name’s really Rusty—but my friends call me Rush. Rush Revere. Because I’ve always been the #1 fan of the coolest colonial dude ever, Paul Revere. Talk about a rock star—this guy wanted to protect young America so badly, he rode through those bumpy, cobblestone-y streets shouting “the British are coming!” On a horse. Top of his lungs. Wind blowing, rain streaming...  Well, you get the picture. But what if you could get the real picture—by actually going back in time and seeing with your own eyes how our great country came to be? Meeting the people who made it all happen—people like you and me?  Hold on to your pointy triangle hats, because you can—with me, Rush Revere, seemingly ordinary substitute history teacher, as your tour guide across time! “How?” you ask? Well, there’s this portal. And a horse. My talking horse named Liberty. And—well, just trust me, I’ll get us there.  We’ll begin by joining a shipload of brave families journeying on the Mayflower in 1620. Yawn? I don’t think so. 1620 was a pretty awesome time, and you’ll experience exactly what they did on that rough, dangerous ocean crossing. Together, we’ll ask the pilgrims all our questions, find out how they live, join them at the first Thanksgiving, and much more. 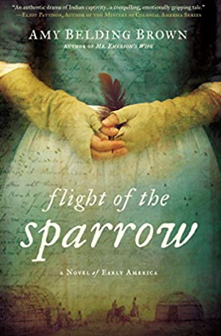 Flight of the Sparrow by Amy Belding Brown
Amazon Synopsis:

Massachusetts Bay Colony, 1676. Even before Mary Rowlandson was captured by Indians on a winter day of violence and terror, she sometimes found herself in conflict with her rigid Puritan community. Now, her home destroyed, her children lost to her, she has been sold into the service of a powerful woman tribal leader, made a pawn in the ongoing bloody struggle between English settlers and native people. Battling cold, hunger, and exhaustion, Mary witnesses harrowing brutality but also unexpected kindness. To her confused surprise, she is drawn to her captors’ open and straightforward way of life, a feeling further complicated by her attraction to a generous, protective English-speaking native known as James Printer. All her life, Mary has been taught to fear God, submit to her husband, and abhor Indians. Now, having lived on the other side of the forest, she begins to question the edicts that have guided her, torn between the life she knew and the wisdom the natives have shown her. Based on the compelling true narrative of Mary Rowlandson, Flight of the Sparrow is an evocative tale that transports the reader to a little-known time in early America and explores the real meanings of freedom, faith, and acceptance.