Murder In Mesopotamia (A Hercule Poirot Mystery) by Agatha Christie 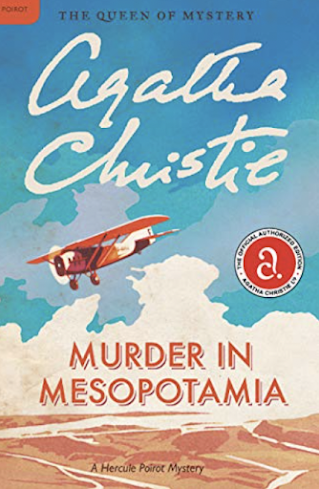 Publication Date: July 6, 1936
Length:  288 pages
My Rating:  ⭐⭐⭐⭐☆
WHY I CHOSE THIS BOOK:
Okay so I fully admit this reason is pretty pointless but I loved the title and the cover. That's the honest truth. Having read the first Elizabeth Peters book set in Egypt amid an archaeological dig site and loved it, I figured this book might have that same flavor. I wanted to read another Poirot mystery since my last review was Miss Marple. So when I saw this book for a great price I had to buy it! Some of Christie's books just don't appeal to me due to the setting and I'm pretty picky about which ones I will try. Also, this one doesn't seem to be super well known (at least I'd never heard of it) and I wanted to review a book not as renowned.
SUMMARY:
Our story begins with a foreword written by a Dr. Reilly, M.D., which is designed to seem like an introduction to the actual story, written by the main character, Nurse Leatheran. At Dr. Reilly's prompting, Miss Leatheran has been asked to recount the events in Iraq on a University archaeological dig that led to the deaths of two people as he believes her to have "professional character of the highest." Amy Leatheran opens her story by explaining how she came to be in Iraq. She is asked by a Dr. Leidner to care for his wife, Louise, who seems to be a nervous sort. As Amy gets to know Louise's story she learns that she was previously married to a man named Frederick Bosner, who supposedly died in World War I and Louise is distraught because she inexplicably seems to be receiving death threats from him.
We are introduced to the many colorful characters who are residing with the Leidners and are part of the dig. It is observed that they seem to be overly polite and tolerant with one another but as the story develops there is an obvious undercurrent of tension, seemingly caused by their direct relationships with Louise. She is not what she seems at first glance. When Louise turns up dead in her bedroom, struck by a heavy object, all are suspects, including Amy. Enter Poirot, who just happens to be in Iraq and is able to lend his services to investigate the murder.
He begins with his usual wit and insight, noticing inconsistencies and unusual, behind the scenes details that most would miss. As more information comes to light about the threats to Louise's life and her husband's supposed death in the war, Poirot unravels a strange story of switched identities and and when a second death occurs, he has to find the cause quickly before anyone else falls victim.
WHAT I LIKED:
I enjoyed this mystery because it really kept me guessing. I found myself completely stumped and when I finished the book I realized that the subtle details Christie adds throw you off track. You are steered in one direction only to pull back at the end and see that it wasn't that way at all. I thought the slow reveal of Louise as at first odd, then neurotic, scheming and seductive, and then finally, the victim was good character development. The narration of Amy as the outsider who witnesses it all was an interesting take. And then of course the funny little quips from Poirot are always good for a laugh. The ending was a little far fetched, but then, it is fiction.
WHAT I DIDN'T LIKE:
I am getting used to Christie's style a little more. She is all about the detective side of the mystery story, not so much personal stories. So the part I didn't like is what I usually don't care for in her books.....its' very clinical and clues oriented. But now that I realize that I'm expecting it and so going in I knew that it would feel more like a puzzle than a tale. There is no involved plot with historical details and intricate, personal, back stories but that's okay because that is not the kind of novel she writes. So honestly, not a lot to complain about. Good setting, lots of twists, and a satisfying ending.
RECOMMEND? OR NOT?   Yes, it is a good one. Especially if you are already a Poirot fan. I think the added touch of the location in the Middle East made it unique and different from some of her other books.