What Book Made You Love Reading? 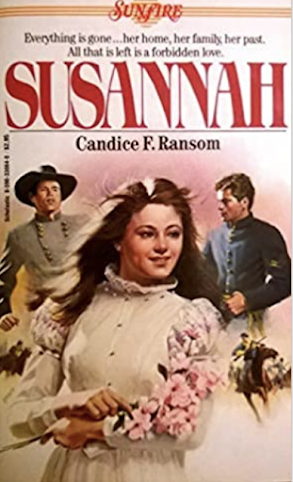 I remember loving my third grade classroom so much. Maybe that's why I taught third grade for 13 years. It was where I really discovered my love of reading and when I was able to really delve into the story part, not just the word calling. By the time I reached fifth grade I was an avid reader. I'd gone through all the SRA lab colors (if you grew up in American public schools in the 80's you remember SRA reading lab) and was always looking for something new to devour. My teacher let us have free reading time often and she had several books that were part of a series called Sunfire. Each one featured a girl living through a different historical time period and she always had two loves to choose from. They were always polar opposites and the heroine had to decide where her heart lay.
Susannah by Candice F. Ransom was the first one I read. I still own my old copy and have probably read it a dozen times over the years. I remember being mesmerized by the cover. Her dress, the handsome young men on their horses, the flowers, and even her hair flying in the breeze. Susannah was a young girl living during the Civil War. She was from the South, like me, and her family owned a plantation in Virginia. She watches her beloved state go up in flames around her throughout the war, loses her brother and childhood friend in battle, and falls in love with a Yankee soldier. She notices the growing distance between her and Katie, the daughter of a slave family working on the plantation, and for the first time starts to understand that slavery is wrong. This was also one of my first interactions with a book that really discussed the dark side of slavery in a way a child could understand without being too graphic. The novel describes all aspects of the Civil War including the economy, major local battles, and the hospital atmosphere as wounded soldiers made their way in for treatment. Susannah must decide whether or not to run away with Cain, the handsome Yankee soldier, or stay in the South as it tries to recover.
This book was Gone With the Wind for kids. But like I said, it tackled the issue of slavery and didn't gloss over it because it was written in 1984, when authors were more likely to include those details. After finishing Susannah, I went on to read almost all of the Sunfire books, and one appeared in my stocking for several years afterward. They are out of print, which is a real shame, but you can buy used copies. The first one, Kathleen, about an Irish maid living in Boston in the 1800's was selling used for almost $100 last time I checked, signifying their ongoing timelessness and popularity.
This book MADE me a reader. It is the first book I really, really connected with. Recently, I found the author on Facebook and contacted her. I told her I was now a reading interventionist and how much her books meant to me in developing a love of reading. She is now in her 70's and was thrilled to hear from me. She said she loved knowing her hard work had paved the way for me and so many other children.
What book made you love reading as a child? Do you still read it today?