The Royal Stuarts by Allan Massie 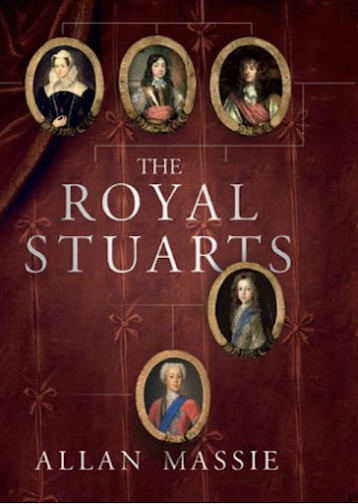 Publication Date: December 20, 2011
Length:  384 pages
My Rating: ⭐⭐⭐⭐⭐
WHY I CHOSE THIS BOOK:
I find very few books about Scottish Kings and Queens and even fewer that focus exclusively on the Stuarts. I've had this book in my Kindle for awhile and it is one I want to share because of the subject matter. Outlander made me obsessed with all things Stuart so this one was a must read.
SUMMARY:
Drawing on superb research, Massie covers the origins of the Stuart family running all the way from the 13oo's to the Jacobites of the 1700's. He starts with the background leading up to the first real Stuart King, Robert II from 1370-1390. Massie has a lot of ground to cover and divides the book into 17 chapters each title one of the Stuart monarchs. Each one is given a nickname describing his assessment of their reign and the reader can quickly navigate between them to get a general overview of the major points of their rule. He starts in Brittany in the 1100's as not much is known about them before this time period. Moving on to Robert II we get more information covering the 300 plus years of rule in Scotland by the Stuart family.
If one is looking for detailed policy decisions or history of the common Scottish man or woman you won't find it here, nevertheless it does present an intriguing look into the lives of the kings, queens, and nobility, how they interacted with England and it continues the story of the Stuarts after the rule of Queen Anne, allowing for the always colorful story of the displaced Jacobite Kings and their waning influence.
WHAT I LIKED:
I really enjoy books like this that give a quick overview of subject matter divided into easy to read chapters with a "just the facts" approach. The chronological timeline allows for understanding by someone who doesn't have an in depth grasp of Scottish history while giving adequate coverage of each monarch. Massie includes personal stories enough to keep you wanting to know more. Examples include that Robert III was a chronic invalid and became lame after he was kicked by a horse, a little dog  hidden in the folds of Mary Queen of Scots' dress as she was executed, and detailing James II's nervousness and anxiety as he was forced to flee into exile.
WHAT I DIDN'T LIKE:
There isn't much to speak of negatively with this book. I'd have loved for the biographies to have been a bit longer and I'm sure he skimmed over many major historical happenings in order to cover such a huge time period, but overall I think this book did as it probably intended: giving a snapshot of each royal Stuart. If you are needing more you'll want to find an individual biography of that particular person.
RECOMMEND? OR NOT?:  Yes, absolutely! It is one you can pick up and read anytime, or skim through to find the subject you are most interested in. I recommend reading it all the way from page 1 to the end though, as it is written in order to grasp the full account of each ruler as he or she relates to the one before and the one after.
Biography History Scotland