All That is Hidden (A Molly Murphy Mystery: Book 19) by Rhys Bowen and Clare Broyles 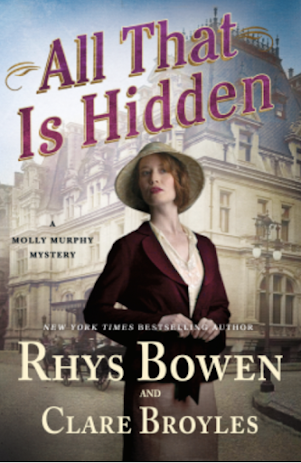 Thank you to NetGalley for loaning me this book for review.

This was my first book by Rhys Bowen to have read but I had heard of her before and knew she was very popular. Even though this is a series book I decided to just jump in and read the one being published this spring. I plan to eventually read the latest book in her other series, Royal Spyness. This is the continuing story of Molly Murphy, a housewife and mother who has come a long way from her days as a single gal newly arrived from Ireland.

Molly is slowly adjusting to her quiet domestic life with her policeman husband, Daniel, and their son and foster daughter. She is retired from her former life of sleuthing and is Molly Sullivan now, living in Greenwich Village in a home she loves, albeit a simple one. When her husband tells her they are moving to a new home in the swanky area of Fifth Avenue with servants and plush surroundings she is bewildered. He also informs her he is running for the office of sheriff and will be closely aligned with Tammany Hall, a shady political organization. Molly eventually discovers it is all a cover for Daniel's real work, investigating corruption within the group.

When Big Bill McCormick, an important associate of Tammany, is murdered during his daughter's birthday party at his own mansion, Molly and Daniel along with their ward Bridie set out to discover why and who is involved. As they get to know the dysfunctional family and their many secrets, the mystery only deepens. Drawing on information obtained by Bridie's new friendship with the daughter, Blanche, and Molly's compassion for Bill's widow, they begin to form a picture of how Big Bill came to be at his desk, stabbed in the back. Strange happenings start to put them in harm's way and Daniel begins to wonder if this undercover scenario has been taken on at unnecessary risk to his family.

The book has a solid mystery that has a lot of twists and turns. I originally guessed at part of the storyline which turned out to be partially true with more added to it and was glad as I hate it when mysteries are too obvious. The author does a good job with an authentic setting and I learned a bit about the politics of the day and Tammany Hall. The behaviors of the servants in Molly's new home as well as the proper behaviors a lady of the manor should adopt were well done and served as an interesting backdrop to the murder plot.

Maybe I'd have been more invested in Molly and her character if I'd read this series in order. It felt like I was missing a lot of her personal story and didn't have a real connection to her children either. Sometimes the writing was a bit simplistic and redundant but this was minor and didn't take away from the story too much. I'm thinking I want to go back and read the first book, Murphy's Law, to get a clearer picture of Molly's life before she meets her husband, Daniel. That may make me see this story in a new light. Overall I thought it was a fun, cozy mystery and would recommend it positively.