The Reluctant Queen: The Story of Anne of York by Jean Plaidy 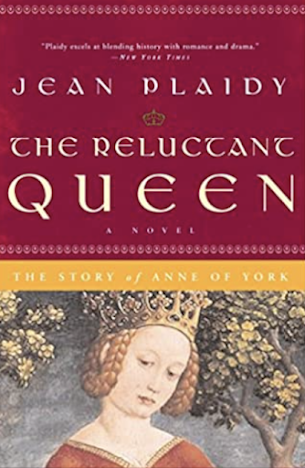 WHY I CHOSE THIS BOOK

This is book 6 in Plaidy's Queens of England series and one of the few books I've found that covers Anne of York exclusively. She is often a storyline in books about Richard III, Edward IV, or the various famous women that surrounded her such as Elizabeth Woodville.  I was eager to read something that focused on her alone. Plaidy is simplistic in style but rock solid in research and I know when I read her books I will learn a lot in an easy to read fashion. She is one of my favorite authors for "getting to the point"  about her subject.

The story, written in first person, begins with a prologue in which Anne is dying and reminiscing about her life and marriage. It is also the night of an eclipse which gives it a supernatural element and sets up the idea that Anne is part of a larger, heavenly plan. She thinks about her husband Richard, his brother King Edward, and the enemies surrounding them all as Richard struggles to maintain his tenuous hold on the crown. It is clear that Anne is no fan of Edward and blames his "profligacy, his self-indulgence" for his downfall, noting that none of his faults mattered to the public because he looked and acted the part of a glorious King. Anne realizes she will die soon and is worried about leaving Richard alone, although suspects there is a budding affair between him and his niece Elizabeth of York.

The story then switches to her remembrance of her life beginning chronologically with her birth to Richard Neville, the Kingmaker and Anne Beauchamp, an heiress whose lands and fortune brought her father the title, Earl of Warwick. She mentions her love for their childhood home, Middleham Castle and how happy she and her sister Isabel were there, although notes that she saw little of her father due to his political obligations. When she is five she remembers her ten year old sister explaining the events occurring around them which will change their lives and the course of history: the cause of the War of the Roses and the "silly old Henry and his horrible Queen Margaret." Anne is still too young to understand it all but has a sense of foreboding of things to come. When Edward of York thwarts her father's plans to marry him off  to a French lady by marrying Elizabeth Woodville instead, Anne's life is turned upside down.

Isabel is soon married to George, Duke of Clarence, giving birth to a stillborn son and finds her marriage is not as happy as she had hoped it would be. To Anne's trepidation she too is married off to the Lancastrian heir, Edward and has to reckon with Queen Margaret whom she soon discovers is not as frightening as she originally thought. She does not have much time to settle into her new life before her father is killed at the Battle of Barnet along with her new husband, Prince Edward. When Anne is sent back to England she finds herself a pawn in the politics of the new Yorkist court and due to the machinations of her brother-in-law George, is abducted and placed into a cook's shop, forced into labor and attempted brainwashing that she is just a common scullery maid. She is eventually tracked down and rescued by Richard, with whom she had struck up a renewed friendship and he proposes marriage to her. Anne is overjoyed and agrees to become his wife.

As Duke and Duchess of Gloucester, Anne and Richard experience joy and happiness away from the royal court. Sadly, this carefree life will not last long as they are pulled back into the ongoing strife. Anne loses more of those most dear to her and must eventually accept that she will take on the role of the "reluctant" Queen. The joy of motherhood tempers her melancholia but even that will have its challenges and tragedy. Throughout the reign of her husband, Anne tries to hold out hope that they will one day return to their happy life in the north at Middleham Castle.

I already knew the basics about the Wars of the Roses and Anne and Richard's story. I loved that Plaidy included new details I hadn't seen focused on as much in other stories. Anne's abduction and rescue from the cook shop, her dying during an eclipse, and her relationship with Queen Margaret are often overlooked because the narrative is geared toward the men of the story or the battles and politics. I really felt like I was living inside Anne's head and seeing her view of things, giving the reader a fresh perspective. Curious and researching the back stories from this book I discovered that historians are divided on the story of Anne's abduction and how it all unfolded but Plaidy obviously went with the best version of her research from the time. It doesn't bother me to know she might have taken some liberties due to holes in the story. It happens in historical novels. This was a great overview of Anne's life, her marriage to Richard, and her dismay at dying, leaving him to reign alone. If one didn't know anything about the Wars of the Roses, you would come away schooled in the basics and able to move on to more complex, detailed stories of the saga.

Most of Plaidy's stories would probably fall into the category of YA if I'm being honest. They aren't terribly deep and her style of writing is sometimes a bit choppy. Being used to longer, incredibly detailed stories like Penman's The Sunne in Splendour, I could easily dismiss her work as childish. But I rarely feel this way when I'm done with one of her books and this one was no different. If you are looking for deep and flowery prose you won't find it here but that's okay sometimes.

Absolutely, yes.....this is a solid historical novel, well researched, and told in a straightforward way. All of her Queens of England books are wonderful and cover engaging women who lived through extraordinary times.