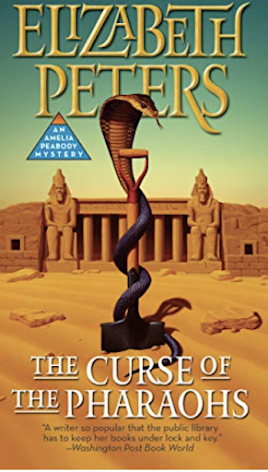 Publication Date: January 1, 1981
Length:  357 pages
My Rating:  ⭐⭐⭐⭐☆
This is the second book in this series and since I almost always go in order when reading series books, my second one to read by this author. I enjoyed book one, Crocodile On the Sandbank, enormously and was really looking forward to seeing what was happening with these characters. Peters really got my attention with her unique style of dialogue and the humorous inner monologue of Amelia. It reminds me of the old movies of the 1940's and 50's. The setting is also a big draw in that there aren't a lot of mysteries that take place in Egypt except for a few Agatha Christie stories.
SUMMARY
Our story begins in England where Amelia and her husband Radcliffe Emerson are attempting a normal, quiet life with their young son Ramses. It is clear both feel stifled by domestic life and the social niceties that go along with 19th century upper crust society. Amelia especially is frustrated at home as wife and mother, yearning to return to Egypt and their archaeological adventures from where they first met. Emerson is a professor now but would rather be digging out tombs and roughing it in the desert. When one Lady Baskerville arrives asking for help with her late husband's latest Egyptian dig, both are excited to oblige her. Thinking the man's death was a natural one, neither Amelia nor Emerson are concerned about any danger, and deciding to leave Ramses with his Uncle Walter and Aunt Evelyn, they journey to the middle east to take over the project. Upon arriving they are introduced to the crew already employed on the site and as they begin work, start to believe that Lord Baskerville's death was in fact caused by something sinister. Overjoyed to be back in a location and atmosphere they are comfortable and enthusiastic about, neither Amelia nor Radcliffe want to get involved with the details of what could be murder but nevertheless soon find themselves targeted personally and have no choice but to begin investigating. While simultaneously continuing with the project, they both start to become suspicious of the different people involved with the dig itself. A mysterious figure in white running around terrifying the workers, more strange deaths, and mayhem continue as the couple work to unravel the who and the why behind it all.
WHAT I LIKED
As in the first book, this one started off with the witty, funny interaction between Amelia and Radcliffe but since they are now married and parents, it included their feelings about their son Ramses, which made it even more endearing. Amelia is constantly keeping up a running conversation in her head that the reader is privy to, concerning her feelings about things and it is amusing to see that she is not especially maternal while Radcliffe is giddy over his son. Although I don't share her disdain for motherhood and domestic life, I did sympathize with the frustrations of being a stay at home mother, as I have been one, and for someone as brilliant as Amelia it must be incredibly trying. Ramses is also an unusually bright and unique child that keeps them on their toes.
When they arrive in Egypt and the mystery really gets going we are introduced to a lot of new characters but each have a distinct personality I found interesting. The author does a good job of giving each a solid back story that keeps you guessing as to the identity of the murderer because all of them have some motive. This book was a bit Agatha Christie like in that way as I found myself having to keep track of the clues and the way Peters was always inserting some new tidbit to throw your predictions off track. The setting is always a draw for me and she does another fabulous job of describing Egypt, the people and culture, and teaching a few layman's facts about archaeology. I did not guess the ending so that is always a plus for me and even the characters I thought would be killed off or have a love story between them were a surprise. The feelings between Amelia and Radcliffe really shine in private even if they publicly argue and bicker and it is clear they are devoted to one another.
WHAT I DIDN'T LIKE
I was a little disappointed that the previous characters Walter and Evelyn were not included much in the story. I really liked them and as Radcliffe's brother and sister in law as well as good friends of Amelia's I had hoped the four of them would be a team again. Sometimes I found Amelia's sarcasm a little off putting and I think she is a bit hard on her husband who clearly matches her in wit and mental strength but she is also a woman living in a time when most men would not typically entertain a lady's opinion about much outside of society and home life. She has to maintain a tough exterior in order to be heard and seen.  The introduction of Ramses in the beginning and how quickly he is left in England and forgotten bothered me a bit because I just don't relate. My personal feelings toward Amelia were annoyance at how unconcerned she seemed to be at leaving her child so suddenly.  Overall the story was good, the suspense was there but I confess I gave it four stars because it just wasn't as good as the first book. I felt it took a bit too long to get moving and sometimes tended to go in circles. But the ending was satisfying so it was okay in the end.
RECOMMEND OR NOT? Yes it is a well written, well researched, entertaining mystery with an exotic setting. This is a series I plan to continue.
19th Century Cozy Mystery Mysteries Victorian Era