This is book 4 in the Margaret Beaufort mystery series. I had not come across the other books before so was excited to know there are more. I have precious little time to read all of an entire series, but if I really enjoy a book I want to go back to the beginning. Hopefully this one does not disappoint.
Margaret Beaufort is a fascinating figure and I always associate her with the dark side of things in the Wars of the Roses. Perhaps this is unfair and perpetuated by the STARZ series, The White Queen and The White Princess, nevertheless I can realistically see her caught up in a mystery like this one.
March 7, 2023
Historical Fiction/Mystery, Thrillers
224 pages 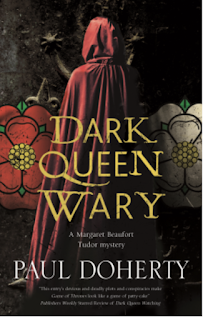 Book description courtesy of NetGalley
1472. Edward IV reigns triumphant over England and his rivals, the Lancastrians. But he is uneasy, for one true claimant remains: the young Henry Tudor, son of Margaret Beaufort, Countess of Richmond. Henry's continued existence worries Edward, so he hatches a plan to bring a cuckoo into the nest – an imposter prince is presented to Margaret Beaufort as her son.
Margaret is no fool and knows she must play this game of kings carefully . . . When she is invited to George Neville’s beautiful home ‘The Moor’ to help investigate some mysterious and gruesome murders she knows dark forces are at play. Whispers of a shadowy figure called Achitophel hang over the house's occupants, like the impenetrable mist that descended on the battle of Barnet the previous year and secured the crown for Edward. And as the body count increases, Margaret suspects there is a link to that fateful battle and the murderer who seems relentless in his thirst for blood . . .
Can Margaret protect her life as well as her true son’s claim to the throne?
Can't Wait Wednesday Medieval Period Mysteries Plantagenets Queens