The Plantagenets by Dan Jones 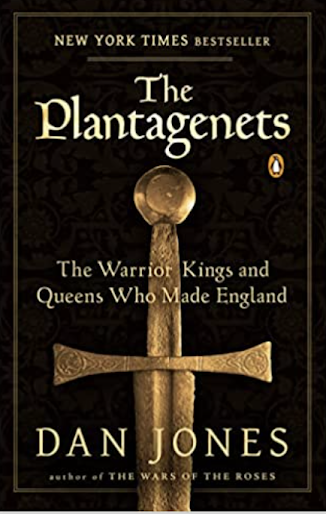 Publication Date: April 18, 2013
Length:  560 pages
My Rating:  ⭐⭐⭐⭐⭐
If you have looked at any of my reviews on my blog you know I'm absolutely obsessed with this topic. I'd read part of Jones' book Wars of the Roses (still need to finish it!) and decided to start at the beginning and go back and read this one first. I also heard an interview with him on the Podcast "History Extra" and found him to be very knowledgeable about his work. His way of explaining things was interesting and so I wanted to dive into his written work of course. Also, I wanted to understand more about the earlier monarchs who shaped the landscape prior to the Wars of the Roses.
SUMMARY
The book is divided into sections covering the reign of each King from Henry I to Richard II. The years span approximately from 1120 to 14oo as these cover the sinking of The White Ship through the deposing of Richard II by Henry IV. Within each section are chapters that have helpful titles to narrow the focus down if you are wanting to read about a specific area of the King's reign. Each ruler is given pretty equal time and nothing is left out including temperament, family dynamics, relations with the Barons and Nobles of the day, economical concerns, major battles, and challenges. Jones gives a fair analysis of his subjects, shining a light on their foibles as well as pointing out when they are maligned by unfair critics. Even King John is treated as worthy of seeing things from his point of view and no one is above scrutiny or praise. From The Anarchy to Bolingbroke's conquest, we see a solid timeline of events and how each led to the next.
WHAT I LIKED
The book covers so much information in an easy to read way it is astounding to behold. I can't imagine the time and research that went into this book as it is packed full of all the things I already knew plus many stories I didn't. It was fascinating to read about John especially for me because Jones surmises at the end of his reign what exactly his brother Richard or his father Henry could have done differently in some of the unfortunate circumstances he was put in. There is a wealth of information about Edward I and II which I find hard to come by in most books. Overall it was a good snapshot of each era with enough detail to satisfy those who know very little or already know a lot about each one.
WHAT I DIDN'T LIKE
There wasn't a whole lot I didn't like except that it could get a bit dry sometimes. I found myself skimming some of the chapters that got bogged down in economics or the intricacies of warfare. I'd have preferred more personal stories but there were enough included that it was still interesting. Some rulers such as Henry II are bound to be more filled with domestic drama and colorful characters. I wanted to be educated on all aspects of the period so it definitely delivered in that regard but I've come to realize I just don't need to know every last detail about the Magna Carta to understand its significance.
RECOMMENDATION
Yes. Whether you are a lover of this area of history or brand new to it, you will enjoy this book and if you want to zero in on certain people or events it is easy to read the parts you want and separate them from the ones you don't. Everyone who loves history will get something out of this book.
History Medieval Period Plantagenets