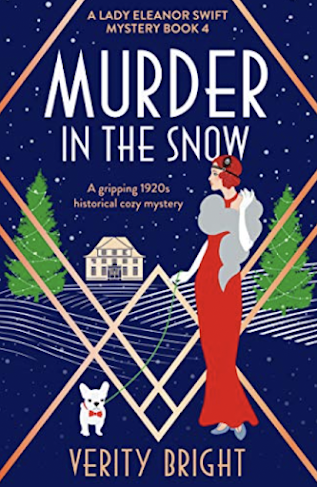 Publication Date: November 16, 2020
Length: 274 pages
My Rating: ⭐⭐⭐⭐⭐
Just in time for New Year's Eve and the last day of December 2022 I have completed a full season of these delightful mysteries!  When I discovered they were written with the setting for each season I thought that was pretty neat and am now looking forward to reading four per year during the matching time period until I've eventually caught up with all of them. This story takes place, of course, in winter and was just perfect in that I started reading it Christmas Eve and ended it New Year's Eve, roughly coinciding with the same days as the story itself. It was a great end to a great year of reading!
In this adventure, Eleanor and Clifford are hot on the trail of a murderer who has seemingly killed a local villager who has come to Henley Hall to partake in the Christmas Eve festivities along with those residents of Little Buckford. At the time of his death everyone assumed he had died during the fun run in the snow, seemingly from a heart attack. But as Eleanor and Clifford find clues revealing otherwise they begin to suspect that not only was he murdered, it was in a similar manner as the murder of Eleanor's Uncle, a case which was never fully proven nor solved. Eleanor feels particularly responsible as the crime occurred at her home during her party in which she was trying to show the townspeople how much they mean to her. When two more people are taken ill and have to be hospitalized with the same symptoms as the murder victim, Clifford and Eleanor have to work fast to make sure no one else is targeted. Along with the dashing Detective Seldon and the loyal staff of Henley Hall, they have plenty of willing help in their quest.
Maybe it was because I was on Christmas vacation and totally relaxed, or maybe it was because I've grown attached to these characters, but I found myself smiling at how much I enjoyed this book as I finished it today. It had everything I love in a cozy mystery: a charming country setting, recurring characters with distinct personalities, a clever, unique murder method impossible to guess at, and two love interests vying for Ellie's affection. It is nice how the author sees fit to occasionally list the suspects and their motives so one doesn't get confused (as I sometimes do in other murder mysteries) and the short chapters make it easy to read even in the busiest of times. It's really the perfect type of story during the craziness that is the holiday season.
When I reviewed the first book, A Very English Murder, I stated that the book was formulaic and that is true. But as I've continued with the series I've realized each one is very unique and that the author has taken a lot of effort to create a new setting and twists and turns in the story. So that formula works here. There are some cozy mysteries that become tedious in this area and I think it is because the characters and plot don't change a whole lot from book to book. These have just enough differences to make them fresh and enjoyable in their own way. I am already excited to read the next one, Mystery By the Sea, in March on my spring break.
Now I'm off to celebrate New Year's Eve with my family and ring in 2023! Wishing you a safe and happy evening from Texas.
20th Century Cozy Mystery Historical Fiction Reading Challenge Holiday Mysteries