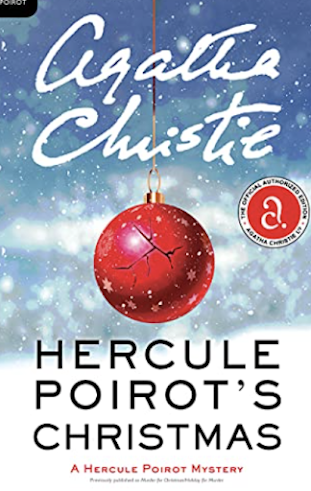 Publication Date:  December 19, 1938
Length: 288 pages
My Rating: ⭐⭐⭐⭐☆
I have been saving this book for awhile now because I wanted to join the Read Christie challenge and this is the book they chose for December. Also, who wouldn't love this book around Christmas time of course! I am still a newcomer to Agatha Christie books and am learning to adjust to her style. As someone who expects a lot of historical atmosphere from her novels it has been a stretch to remember that Christie books are all about the crime and the whodunit and not necessarily the historical setting. But I think I'm finally appreciating her the way she intended. This book had a lot of colorful characters to keep track of and my original theory was way off. Seeing the story develop and realizing how wrong I was made it an interesting read.
Summary
We begin in London on December 22nd at a train station where a mysterious stranger, Stephen, is returning home from South Africa after a long absence. His cryptic thoughts as to his reappearance are clues to the unfolding drama. On the train he meets a young woman, Pilar, who stands out due to her exotic, ethnic appearance and the two strike up a conversation. When Stephen realizes she is headed to the same home, Gorston Hall, as he is, he is puzzled and intrigued. But he keeps this news to himself.
At Gorston Hall we meet the first of several couples who are gathering for the holiday festivities.  The host and owner of the manor house is Simeon Lee, an old man nearing the end of his life, who has called everyone together for his own nefarious purposes. His four sons, Alfred (who already lives at Gorston Hall with his wife, Lydia), George, David, and Harry (who is unmarried) are all as different as can be and at odds with one another due to the complicated relationship between them and their father and now deceased mother. All are mistrustful of Simeon and his motives and have their own reasons for wanting to be present to witness the awkward family reunion. Their wives are equally distrusting of the old man and only care to know what he might be up to regarding changes in his will. Enter Stephen and Pilar who appear to throw a wrench in the already contentious situation. Stephen is Simeon's late business partner's son and Pilar announces she is Lee's granddaughter.
When Simeon is brutally murdered on Christmas Eve all are suspects. Detective Hercule Poirot, who happens to be visiting the area, is asked to help with the case and is only too happy to agree. As he eventually moves into Gorston Hall to get closer to the suspects and crime scene, he discovers some are not who they claim to be and others are hiding secrets that unravel slowly to form a much different picture than they present. Knowing Simeon was murdered in a seemingly locked room with no one inside makes for a difficult case. Poirot sets out to discover just how it could have happened and the twist is not what anyone expects.
What I liked
I enjoyed this book and felt that the ending was satisfying. It was not one I figured out quickly, although I did start to suspect the correct answer in the last few pages. Still, it was hazy enough throughout the story that Christie did a superb job of leading one in the wrong direction several times. The couples and their wives were a hot mess of dysfunction and Stephen and Pilar added a mysterious quality to the bunch. I thought Harry, the prodigal son was an interesting character and Poirot is always fun to watch as he goes about his work solving the crime. The interaction between him and the policemen working the case was well written as the three men bounce ideas off of one another, always looking to Poirot to guide them and wanting his expert opinion.
What I didn't like
Sometimes the story seemed to go in circles and repeat itself with references to the characters' backgrounds. I found myself thinking I already knew information that was just being presented a different way again. There wasn't much of a Christmas atmosphere and at times it felt as if this book could have taken place pretty much in any month. Unlike Anne Perry, Christie didn't work to give one that holiday vibe, which was a bit disappointing. But this didn't take away from my enjoyment of the story.
Recommend or not?
Although I enjoyed it, I don't think it is one of Christie's strongest I've read so far. Noticing it is book 20 in the Poirot series I can't help but wonder if maybe she was churning out many books at this time in her career and wasn't able to create as strong of a story as she typically had in the beginning. For this reason I gave it four stars instead of five. I am glad to have read it and it is a must for any Christie fan but it certainly would not be the one I'd start with.
20th Century Agatha Christie Cozy Mystery Historical Fiction Reading Challenge Mysteries Read Christie Challenge